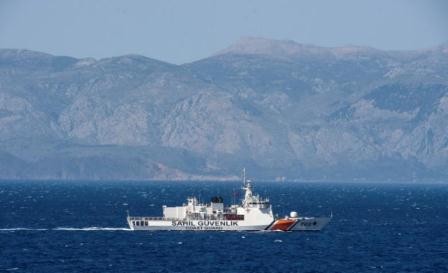 Turkey is seeking an end to NATO's counter-migration mission in the Aegean Sea and it is telling the U.S.-led alliance that the sharp drop in refugees trying to get to Greece means there is no longer a need for warships to patrol its coast.

Turkish Defence Minister Fikri Isik told other NATO defense ministers on Wednesday that Ankara no longer saw a need for the mission to continue beyond the end of December, according to two people briefed on the exchanges, despite strong support across the alliance for the mission.

"Whether this NATO force is here or not, we will continue our battle against this migrant movement," he said.

The uncompromising stance came as NATO prepares to help a separate EU migrant maritime mission off Libya's coast, to which Turkey will send ships and planes to carry out air and sea patrols of traffickers sending refugees toward Italy.

Germany's defense minister, Ursula von der Leyen, whose country currently leads the Aegean maritime mission, said the operation was secure until Dec. 31. Asked what could happen in 2017, she said: "We will have to see then".

Diplomats say Turkey is unhappy with NATO ships moving about in waters that Turkey and Greece have long contested and is worried that Greece could gain the upper hand in a dispute about a group of islets in the Aegean Sea.

An end to the NATO mission, agreed in February, would alarm the European Union, which is facing its worst refugee crisis since the end of World War Two, driven by the 5-1/2 year war in Syria that has displaced some 11 million people.

An EU deal with Turkey remains in place and is providing Ankara with billions of euros so long as Turkey keeps refugees on its territory and stops people smugglers moving them across the Aegean to Greece. There, thousands of refugees are already in camps, waiting to be granted asylum or returned home.

According to a European Commission report in September, only 85 people are arriving on the Greek coast every day, compared with over 10,000 arriving in a single day in October last year.

Unlike the EU's mission off the Italian coast, which brings rescued migrants to Europe's shores, migrants are returned to Turkey even if they are picked up in Greek waters.

Germany and Britain, with U.S. support, see the presence of NATO ships patrolling the waters between historic rivals Greece and Turkey as a way to uphold the EU agreement with Turkey. NATO ships pass reconnaissance to Turkish and Greek coastguards and to the European Union border agency, Frontex.

"We have seen a very substantial reduction in the number of illegal crossings and we have been able to cut the lines of the criminal networks organizing the illegal crossings," Stoltenberg told a news conference.

Turkey's ability to block the mission next year comes down to a technicality. Under NATO rules about standing maritime forces, Turkey is due to take over leadership of the so-called Standing Maritime Group Two - used in the Aegean - from January.

But under the terms of the Aegean mission agreement, neither Greece nor Turkey can lead it.

Turkey could block an extension of the mission from January on that basis, as NATO needs consensus, although diplomats say other nations could come forward to lead the mission.