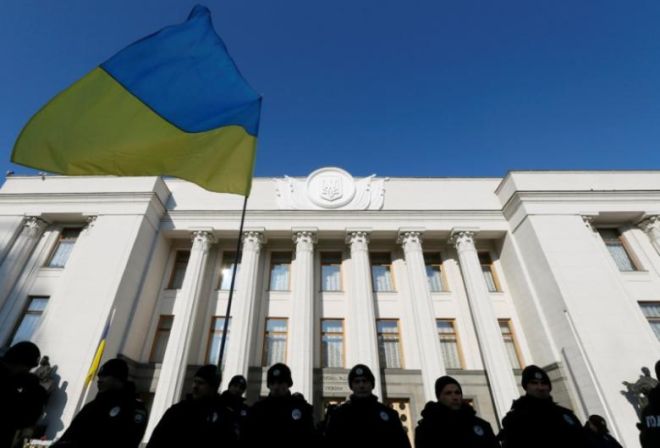 The Ukrainian parliament called on the European Union on Wednesday to grant the former Soviet republic visa-free travel, a day before the bloc is due to debate the matter, with sources pointing to hesitation on the side of Germany and France.

Ukraine has been the heart of a dispute between the West and Russia since Moscow annexed the Black Sea peninsula of Crimea in the spring of 2014 and went on to back rebels in a war against government troops in the east of the country.

The EU and United States have since imposed sanctions on Moscow and sought to build closer ties with Kiev, though they have also grown annoyed with Ukraine's slow progress on reforms and fighting corruption.

"They have invited us to the large European building but tell us to wipe our feet. We wiped them once, we wiped them the second time, changed the shoes, put on slippers but are still standing in front of a closed door," said Leonid Yemets, a Ukrainian lawmaker with the People's Front group.

"Now it's up to you dear EU staff and bureaucrats. If you are not able to deliver on your commitments then, excuse me, but neither you nor we... need such a Europe."

Germany and France led the drive to hold off any new visa waivers before the EU beefs up an emergency mechanism to suspend free-travel agreements if needed.

The bloc is wary of any repeat of a 2015 influx of some 1.3 million refugees and migrants, and leaders fear appearing soft on immigration following Britain's vote to leave the EU and the U.S. election of Donald Trump as president.

Talks on this suspension mechanism would not be completed by Thursday, when 28 EU representatives meet on Ukraine, just a week before an EU-Ukraine summit is due in Brussels on Nov.24.

Berlin is now seen as even more cautious ahead of elections in Germany next September in which an anti-immigrant party is seen performing well, diplomats in Brussels say. France also faces a presidential election in April next year, with an establishment candidate expected to face a run-off against anti-immigrant National Front leader Marine Le Pen in May.

EU states may or may not take a formal decision on Ukraine on Thursday, depending on whether there is enough support.

Any agreement would not take effect until the mechanism allowing it to be suspended is put in place, a condition also imposed when the bloc decided last month to waive visas for citizens of a smaller former Soviet state, Georgia.

"We want the snap back mechanism, then it works," said a German government source.

The Netherlands, where people voted last April against ratifying an agreement establishing closer ties between Ukraine and the EU, will also be in an awkward position on Thursday.

The agreement, which aims to gradually free up trade between Ukraine and the bloc, is now being provisionally implemented after the other 27 EU members ratified it, despite Dutch voters rejecting it in a referendum.

Feuds over that pact precipitated Ukraine's crisis in 2013, when a pro-Russian president in Kiev tried to abandon it for closer relations with Moscow only to trigger street protests that toppled him and led to Russia's seizure of Crimea.

Wednesday's Ukrainian parliamentary resolution urged the EU to grant Ukraine visa-free access by the end of the year.

A failure to do so would frustrate pro-Western politicians in Ukraine, just days after two other former satellites of Moscow - EU member Bulgaria and ex-Soviet state Moldova - each elected presidents who favor closer ties with Russia.

Ukrainians worry that the EU could link the visa liberalization with Kiev implementing its side of the Minsk peace agreement negotiated by Berlin and Paris for east Ukraine's Donbass region.

The accord reduced fighting there considerably but delivering on further points of the peace plan has stalled for almost two years, with Kiev and Moscow trading blame.

The Ukrainian parliament said relaxing travel rules to the EU should not include any additional criteria or conditions, "especially those beyond the responsibility" of Ukraine.

The shock presidential election victory of Trump in the United States and his promises of improving ties with Russia only add to Ukraine's deep fear that Washington, Moscow and Berlin could now cut deals behind its back.

"I was alarmed by talk of a link to Minsk agreements," Yemets told the parliament session in Kiev.

Several diplomats in Brussels were skeptical that such a link would be imposed. They said that, while there has been speculation for some time about making the visa waiver conditional on the Minsk accord, Berlin has never presented such a stance officially.

They said it would trigger a backlash from other EU states.

"That's really not a road many want to follow," said one diplomat. "There could be delays but it's hard to imagine it (the visa waiver) would not happen eventually."