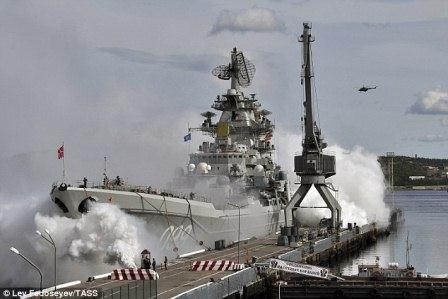 Russia has accused a Dutch submarine of trying to monitor its aircraft carrier and follow its vessels in the Mediterranean, branding the manoeuvre 'clumsy' and 'dangerous', and warning of 'grave consequences'.

According to the Russian defence ministry, the Severomorsk and the Vice-Admiral Kulakov, two of its anti-submarine ships, 'spotted a submarine from the Dutch navy, which tried to approach the Northern Fleet's aircraft carrier group in the eastern Mediterranean.'

The Dutch submarine, which was detected by anti-submarine helicopters, was located about 12 miles from the Russian warships, it said.

'The vessels followed its manoeuvres for more than an hour and forced it to leave the deployment area of the aircraft carrier's group,' a ministry statement said.

'These clumsy attempts to carry out dangerous manoeuvres in the immediate proximity of a group of Russian vessels could have had grave navigational consequences,' it continued.

Russian warships 'regularly' detect NATO submarines on their way to the Mediterranean, the ministry said.

When contacted by AFP, the Dutch defence ministry had no immediate comment on its naval operations.
In recent months, Russia has reinforced its naval presence in the Mediterranean as part of its intervention in Syria where it has been conducting an aerial campaign in support of President Bashar al-Assad.

Russia also has an airbase in Hmeimim just south of the Syrian city of Latakia from which it has carried out air strikes since the start of its military intervention in September 2015, as well as a naval facility in the port city of Tartus.

Nato has also said that Russian fighter jets are constantly testing defences over the Baltic states, with more than 600 'interceptions' so far this year.

Nato pilots, most often German, defending the skies over Estonia, Latvia and Lithuania have said the situation in the Baltic has become serious.

Lieutenant Colonel Swen Jacob, the commander of the German pilots, said they often flew as close as 10 yards from the Russian jets and one occasion a Russian pilot gave him a middle-fingered salute.

The Russian air force is said to be under orders from President Vladimir Putin to be more aggressive in the air.
Given Moscow's aggressive posturing, Nato chiefs are scrambling to put together a force of 300,000 troops which they can put on 'high alert.

There are fears that President Putin may launch an attack on the West, after relations with Russia plummeted.

Most Nato members cut their defence spending dramatically since the Soviet Union collapsed in 1991 but Russia has been bolstering its military capabilities, holding parades involving more than 100,000 troops each year.