Iraqis and Saudis at odds over Abadi’s visit to Riyadh 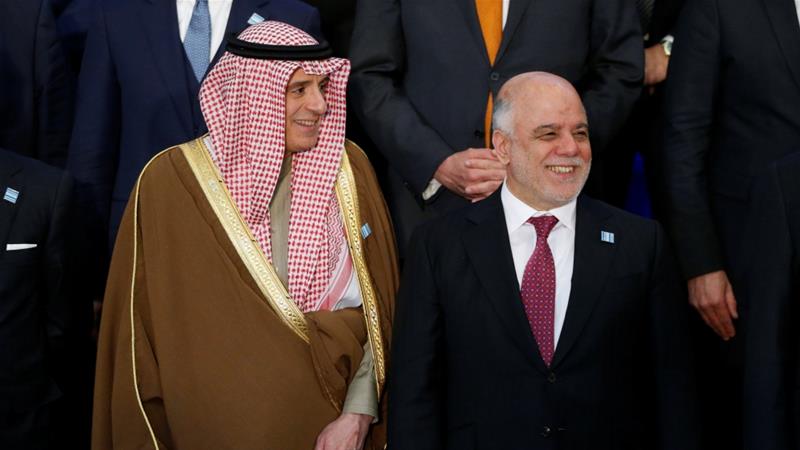 Officials from Saudi Arabia and Iraq on Thursday expressed conflicting accounts over a postponed proposed visit to Saudi Arabia by the Iraqi Prime Minister, as the Gulf diplomatic crisis drags on.

Saudi diplomatic sources told DPA news agency that a visit of Iraqi Prime Minister Haider al-Abadi to the kingdom, which they claims was due to take place on Wednesday, was postponed as per request of the Iraqis.

They said that the Iraqis had to postpone the visit for internal reasons.

But sources in the Iraqi prime minister's office told Al Jazeera that the Iraqis did not set Wednesday as the date of the visit and said Iraqi officials were surprised that the date of al-Abadi's visit to Saudi was leaked to the public.

The Iraqi officials say that a proposed Saudi visit is only one part of al-Abadi's Gulf tour that will also take him to Kuwait and Iran.

Jassem Mohammed Jaafar, an MP from Iraq's ruling State of Law coalition, told DPA that he didn't believe al-Abadi's visit was in Iraq's interest because Saudi Arabia is trying to embarrass Iraq in taking sides in the Gulf crisis.

"Saudi Arabia intentionally announced the Iraqi PM’s visit on Wednesday to embarrass the Iraqi government and trying to push us into a corner so we can take sides in the Gulf crisis. I believe that the timing of the visit doesn’t serve the best interests of Iraq because we will end up looking like we support one side over another".

Al-Abadi said on Tuesday that his country opposed the recent boycott of his Gulf neighbour Qatar, which has been led by Saudi Arabia since last week.

"Iraq is against besieging any Gulf country, even if it does not agree with us," al-Abadi said during his weekly press conference.

Saudi Arabia, the United Arab Emirates, Bahrain and Egypt, as well as a number of African countries, have severed diplomatic ties and transportation links with Qatar, accusing it of supporting "terrorism". Qatar strongly denies the allegations.

A Saudi diplomatic source told DPA on Monday that al-Abadi's proposd talks in the kingdom were set to focus on the fight against terrorism and reconstruction of damaged Iraqi provinces.