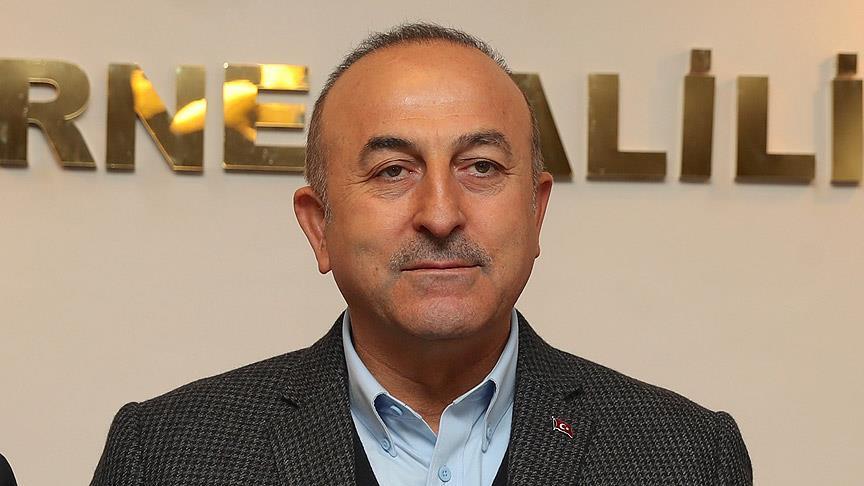 Speaking at a Qurban Bayram (Feast of the Sacrifice, also known as Eid al-Adha) celebration program for the ruling Justice and Development Party (AK Party) in Demre district of his native Antalya province, Chavushoglu said: "When we first arrest a FETO member, Germany causes a stir first. What is it to you? They say: 'Why do you arrest our [German] citizens?' They are Turkish citizens at the same time. If they are FETO members, if they were involved in the coup attempt or supported it, why do you look after them? Why does it bother you so much?"

Chavushoglu's words came after two German nationals, a married couple of Turkish origin, were detained Friday in Antalya Airport amid an ongoing probe on their suspected FETO membership.

Berlin acknowledged the detentions as arrests of two more German citizens in Turkey, without referring to their FETO ties. A total of 12 German nationals, including four with dual German-Turkish citizenship, are in custody as part of ongoing terror probes. Germany portrays these incidents as political imprisonment and demand for their immediate release, although Turkish officials repeatedly stated that they will be subject to the same judicial procedures, which currently continue.

German chancellor Angela Merkel claimed Friday that there is "no legal basis" for detention in most of these cases. "And that's why we need to react decisively here," she said, adding that the government would "perhaps have to rethink" its policies vis-a-vis Turkey.

Amid an ongoing judicial processes, Merkel's spokesman Steffen Seibert ruled that the suspects were arrested on "unjustifiable grounds."

Chavushoglu reminded the 4,500 files given to Germany over terror related cases including PKK and FETO, and pending extraditions requests. He noted that verdicts were given in only three cases in the last 10 years, criticizing excuses of German officials resorting to an independent judiciary while criticizing Turkish justice system at the same time.

"Why do you give status to a traitor that had attempted to coup? Why do you give the right to seek asylum? It is because animosity against Turkey or because you love them so much?"

Relations between the two NATO allies have deteriorated sharply in the last two years over a number of issues. The escalating tensions have split the Turkish community in Europe's top economy, the largest diaspora abroad with an estimated population of five million, which is a legacy of Germany's "guest worker" program of the 1960s and 70s.

In early June 2016, German parliament adopted a resolution describing 1915 events as "genocide" against Ottoman Armenians, prompting angry reactions from Turkey, which in turn repeatedly barred German lawmakers from visiting soldiers stationed in Incirlik Air Base for anti-Daesh operations. As a result, Germany decided to move the aircraft and related personnel to Jordan.

Turkey repeatedly accused Germany of harboring FETO-linked suspects after July 15 coup attempt, in addition to ongoing support or inaction regarding PKK members and sympathizers for decades amid rising clashes and terror attacks since mid-2015. A recent example of support to FETO was Germany's rejection of a formal request from Turkey to freeze assets of members of the FETO, which remains strong among the Turkish diaspora as Berlin ignores calls from Turkey to shut down FETO-linked institutions.

Whereas Berlin, for its part, criticized Ankara over the crackdown that followed last year's failed coup attempt, accusing Turkish officials and imams affiliated with the Turkish-Islamic Union for Religious Affairs (DİTİB) with espionage.

In the run-up of Turkey's April 16 constitutional reform and presidential system referendum, Germany was among the European countries that barred Turkish ministers, ruling Justice and Development Party (AK Party) politicians and other figures to hold events for the "yes" campaign, while allowing the opposition's "no" events. This stance added more fuel to tensions among the two countries, especially at a time when PKK sympathizers were able to freely hold marches and fundraisers in German streets.

The arrest of several German nationals, including the Turkish-German journalist Deniz Yücel, the Istanbul correspondent of the Die Welt daily who being accused of espionage and terrorism charges, further frayed ties. Yücel has now spent 200 days in Turkish custody ahead of a trial on terror charges.

Turkish German journalist Meshale Tolu has been held on similar charges since May, while human rights activist Peter Steudtner was arrested in a July raid.

In return, Erdogan urged ethnic Turks in Germany to vote against Merkel's conservatives and their coalition partners, the Social Democrats, in September 24 elections.