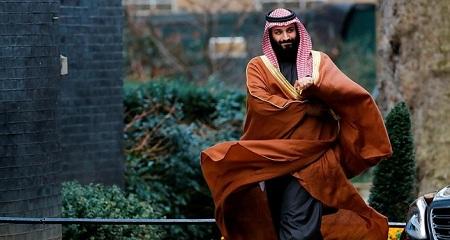 Saudi Arabia’s Crown Prince Mohammed bin Salman has given a wide-ranging interview to the Atlantic, having addressed the most pressing issues in the Middle East.

In the interview, which took place prior to the recent violence in the Gaza Strip, the Crown Prince has stressed the need to assure peace and stability and normalize relations. Bin Salman has told the Atlantic that Saudi Arabia had no “problem with Jews” and shared “a lot of interests with Israel,” underscoring that both Israeli and Palestinians are entitled to their own land.

“I believe that each people, anywhere, have a right to live in their peaceful nation. I believe the Palestinians and the Israelis have the right to have their own land. But we have to have a peace agreement to assure the stability for everyone and to have normal relations,” he said.

"Our position on Jerusalem has always been very clear. We believe in a two-state solution based on the relevant UN resolutions and the Arab peace initiative. We believe that in the end, we will have a Palestinian state in the '67 [1967] borders… with east Jerusalem as its capital. This has been our position, this remains our position," he said.

While Riyadh has no diplomatic ties with Tel Aviv, Israeli Prime Minister Benjamin Netanyahu once admitted that the country had “fruitful cooperation with Arab countries” that it kept generally secret. According to Israeli Energy Minister Yuval Steinitz, Israel has had secret contacts with a range of Arab nations, including Saudi Arabia, with the IDF Chief of Staff suggesting sharing intelligence with Riyadh to resist Iran.

Having included Iran in the so-called “triangle of evil,” along with the Muslim Brotherhood and terror groups like Daesh*, bin Salman has once again lashed out at his bête noir, the supreme leader of Iran Ali Khamenei, reiterating his “Hitler” remark.

“I believe that the Iranian supreme leader makes Hitler look good. Hitler didn’t do what the supreme leader is trying to do. Hitler tried to conquer Europe. […] But the supreme leader is trying to conquer the world. […] He is the Hitler of the Middle East. In the 1920s and 1930s, no one saw Hitler as a danger. Only a few people. Until it happened. We don’t want to see what happened in Europe happen in the Middle East,” the Crown Prince said, when the Atlantic’s editor-in-chief, Jeffrey Goldberg, argued that Hitler was “the worst thing you can be.”

In November 2017, the Crown Prince told The New York Times that Iran’s supreme leader was “the new Hitler of the Middle East,” and dismissed the strategy of appeasement, used against the Nazi leader in Europe.

In an interview with the Wall Street Journal last week, the Crown Prince warned of a possible war with Iran in 10-15 years, urging the international community to impose more stringent sanctions against Tehran to avoid a military confrontation.

In January 2016, Saudi Arabia severed diplomatic ties with Iran after attacks on its diplomatic missions in Tehran and Mashhad, triggered by the execution of top Iranian Shiite cleric Sheikh Nimr al-Nimr, along with 42 other people convicted of terrorism by Riyadh. In December 2017, Iranian President Hassan Rouhani named two conditions for restoring “good relations” between the two countries: Riyadh should "stop the misguided friendship with Israel and the inhumane bombardment of Yemen."
The two major powers in the Middle East have been longtime rivals for dominance in the region, supporting opposite sides in the conflicts in Yemen and Syria. The relations between Saudi Arabia and the Islamic Republic have further deteriorated following the Yemeni Houthi rebels’ missile launch targeting Riyadh, with the latter blaming Tehran for providing the insurgents with weapons. Iranian authorities have consistently denied the allegations.

When Goldberg asked whether the kingdom’s military interference in Yemen is exacerbating the situation in the country, bin Salman elaborated that the Saudi campaign was aimed at bringing stability and “helping the legitimate government” after the 2015 coup d’état.

Since 2015, the Saudi-led coalition, supporting the Yemeni President Abd Rabbuh Mansur Hadi has been carrying out airstrikes against the Houthi rebels at Hadi’s request. According to the Yemeni Ministry of Human Rights, 600,000 civilians have died or sustained injuries over past three years as a result of Saudi-led indiscriminate airstrikes.