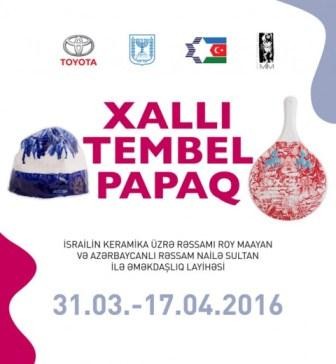 The “Spotted Tembel hat” exhibition, which will take place in the Museum of Modern Art from 31st of March until 17th of April, is a collaborative project of Azerbaijani artist Naila Sultan and Israeli ceramic artist Roi Maayan.

The mythical materials of the “Israeli” – the Tembel hat (a bowl shaped hat, made of cloth) and the beach paddles (a wooden paddles used in a beach game in which the players hit a small ball back and forth), are in fact anachronistic representations of “Israeliness”. Those representations of the “fair Israeli” were indeed part of an active mechanism aimed at creating images defining “the new Jew”, one who is detached from the diaspora, sweet on the inside and prickly on the outside.

Naila Sultan is a member of the Union of Painters of Azerbaijan. She took part in several ceramic symposiums in different countries, as well as in Israel.

Roi Maayan, a leading Israeli potter, is often invited all around the world to collaborate with local artists. In each of these journeys the artist wishes to create a material and technological dialogue between the local ceramic tradition of his hosts and his own in order to create a hybrid body of work.