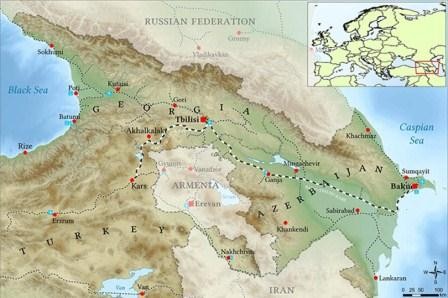 The first ever professionally completed map of the historic railway line linking Georgia with Azerbaijan and Turkey has been published to celebrate the anniversary of the birth of the Georgian national railway.

Georgian geographer Giorgi Balakhadze revealed the map of the Baku-Tbilisi-Kars railway project to mark the auspicious date, as Georgian Railways is celebrating 144 years since its launch.

The map showed the Baku-Tbilisi-Kars project in bold as well as the lines of existing operating railway networks in Azerbaijan, Georgia and Turkey.

The Georgian cartographer created the map for the article about the railway project on online encyclopedia Wikipedia, where he is one of the users actively involved in editing work.

The railway project, linking the capitals of Azerbaijan and Georgia with Turkey's northeast city Kars, was initiated in partnership of the three countries in 2007.

Intended to transport passengers as well as goods, the railway line will represent the first railway connection to Turkey for travelers from Georgia.