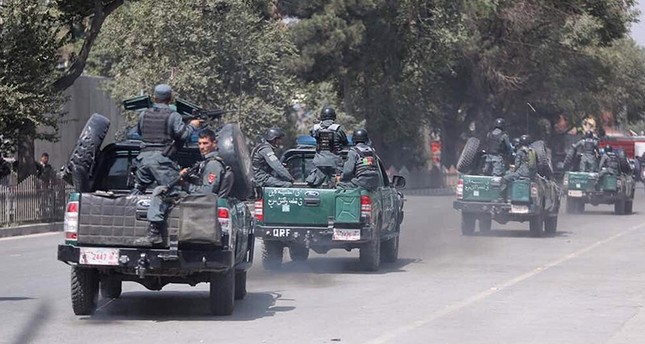 At least five people have been killed in a bomb blast in front of a bank in Afghanistan's capital Kabul on Tuesday, police said.

Axar.az reports citing Daily Sabah that, "At least nine others were wounded when a suicide bomber detonated his explosive vest in front of a Kabul Bank branch," said Basir Mujahid, a Kabul police spokesman.

The blast happened at a busy time for banks, with the religious Eid festivities set to soon begin. Many people, specifically government employees, will get their salaries and Eid bonuses.

Nearby the blast site, but behind heavy fortifications, are located the U.S. embassy and the NATO headquarters.

It was the latest explosion to rock the war-weary Afghan capital and comes a week after United States President Donald Trump committed American soldiers to Afghanistan indefinitely.

Two months ago, ahead of the Eid al-Fitr Muslim holiday, a Taliban suicide bomber targeted a Kabul Bank branch in southern Helmand province, killing at least 29 people, mostly civilians. At the time, the Taliban claimed there were no civilian deaths and said they had only targeted members of the Afghan security forces who had gone to the bank to collect their salaries.

In May a massive truck bomb ripped through Kabul's diplomatic quarter, killing about 150 and wounding around 400 people, mostly civilians.

Kabul has also seen a sharp increase in attacks lately.

Last week, 28 people, including women and children, were killed when Daesh terrorists attacked a Shiite mosque during Friday prayers. In that attack, which went on for hours, more than 50 people were also wounded after two assailants blew themselves up. Another two attackers were shot dead by Afghan security forces.