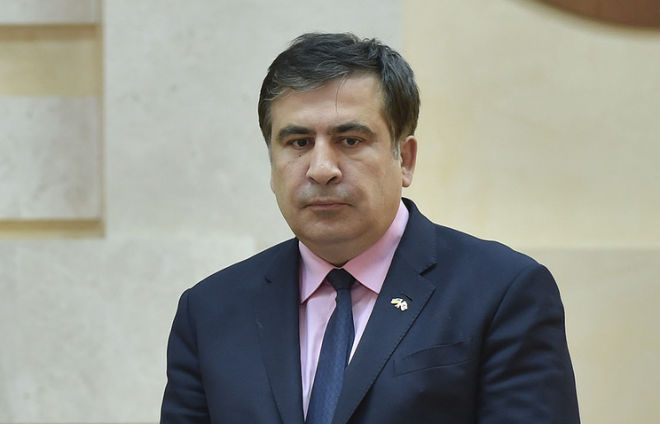 Mikhail Saakashvili, the former governor of Ukraine’s Odessa region, stated at a news conference on Friday that it was necessary to create a "new political force for toppling the current political elite" at early presidential elections to Verkhovna Rada.

"We are going to create a broad political force in order to replace the current elite," Saakashvili said. "We should hold early elections to Verkhovna Rada and change the so-called political clique," he added. Saakashvili said that he was not planning to enter into talks with any of the politicians since there could be no negotiations in Ukraine. There can only be wheeling and dealing," the ex-governor said.

Saakashvili believes that unlike the previous government, the incumbent authorities do not have political support.

Earlier, Saakashvili said that he was ready to create a new party named Khvylya ("Wave") for participation in the early Rada elections.

Mikhail Saakashvili, Governor of Ukraine’s Odessa region, announced his resignation on November 7. He pinned his decision to step down on the fact that he found it impossible to combat corruption, which was said to be traced to top officials in the executive branch including President Poroshenko himself.

Saakashvili said that he would no longer cooperate with President Pyotr Poroshenko.

"Poroshenko had a chance to use me for the right purposes, for real reforms instead of intrigues," Saakashvili told a news conference in Kiev. "But it turned out that real reforms and his own prosperity are contradicting each other."

"He is not the one to give me orders. Poroshenko knows me longer than Trump and he did not want to use my experience in order to help Ukraine, therefore, I am going to do what I want," Saakashvili said.

He added that he would meet with Poroshenko only when the president was ready for early parliamentary elections.

Georgia’s former president Mikhail Saakashvili fled Georgia in mid-November 2013, days before his second term in office expired and the inauguration of President Georgy Margvelashvili (November 17, 2013). After that, he stayed in the United States and Ukraine.