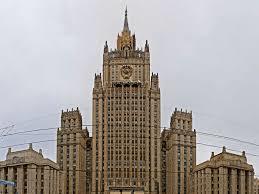 Russia’s Foreign Ministry has issued a statement regarding the extradition of blogger Alexander Lapshin to Azerbaijan from Belarus.

“According to information available to us, on February 7, the Supreme Court of the Republic of Belarus denied the appeal filed by Russian and Israeli citizen Alexander Lapshin against the decision of the Belarusian Prosecutor’s Office to extradite him to Azerbaijan. Moscow is deeply disappointed by this decision, which is in sharp contrast with the spirit of alliance between Russia and Belarus. Russia will take all necessary actions to protect the Russian citizen’s all legal interests and rights in order for him to be returned to his family soon.”

Alexander Lapshin, who holds Russian, Israeli and Ukrainian citizenship, was handed over to Baku on February 7 and escorted out of the airport by law enforcement agents.

On December 15, 2016, police in Belarus detained Alexander Lapshin, a popular travel blogger, for his prior visits to Nagorno Karabakh and for his criticism of the Aliyev regime.

On 20 January 2017 the General Prosecutor’s Office of Belarus decided to have Lapshin extradited to Azerbaijan. An appeal to the ruling was denied by Minsk City Court.

The Supreme Court of Belarus ruled to leave the decision of the Prosecutor General’s office on Lapshin’s extradition to Azerbaijan in force.