Azerbaijan stands out with its ‘decisive position’ 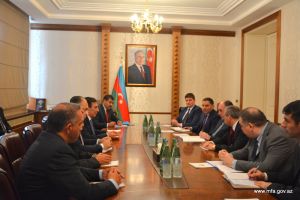 Azerbaijan stands out with its decisive position in the fight against international terrorism, said Speaker of the House of Representatives of the Parliament of Jordan Atef Yousef Saleh Al-Tarawneh, who is on a visit to Azerbaijan.

Axar.az reports citing to APA he made the remarks at a meeting with Azerbaijan’s Foreign Minister Elmar Mammadyarov on Thursday, the Foreign Ministry told.

He noted that the Azerbaijani government’s efforts to promote and encourage Islamic values around the world are praiseworthy.

The speaker added that relations between Jordan and Azerbaijan are upon friendship and fraternity.