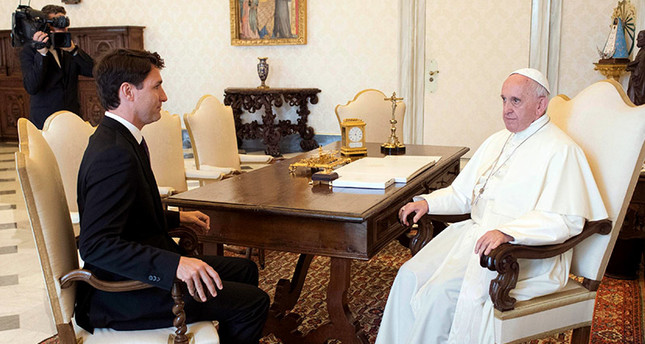 Canadian Prime Minister Justin Trudeau on Monday urged Pope Francis to visit Canada to apologize to indigenous peoples for the Catholic Church's treatment of aboriginal children in schools it ran there.

Starting in the late 19th century, about 30 percent of children of Canada's native peoples, or about 150,000 children, were placed in what were known as "residential schools" in a government attempt to strip them of their traditional cultures and ancestral languages.

For over a century, the schools were government-funded but many were administered by Christian Churches, the majority by Roman Catholics.

"I told him how important it is for Canadians to move forward on real reconciliation with the indigenous peoples and I highlighted how he could help by issuing an apology," Trudeau told reporters after meeting the pope.

A Canadian truth and reconciliation commission wanted an apology from the Roman Catholic Church in its extensive list of recommendations in a 2015 report.

The report into a "cultural genocide" of more than a century of abuse collated evidence over six years from some 7,000 former students in Canada.

Trudeau and the Argentinian pontiff had "cordial discussions" during their 36-minute private meeting, the Vatican said in a statement.

Without addressing the schools issue directly, it said the talks had "focused on the themes of integration and reconciliation, as well as religious freedom and current ethical issues".

Some 150,000 Indian, Inuit and Metis youngsters were forcibly enrolled into 139 residential schools, set up to assimilate native people and many operated by church groups on behalf of the Canadian government.

Many were physically and sexually abused and today blame their experience for a high incidence of poverty, alcoholism and domestic violence, as well as high suicide rates, in their communities.

Trudeau, having already offered his own apology to survivors, noted after the 2015 report that Pope Francis had previously offered similar apologies, for example over the treatment of indigenous communities during the colonial era in South America.

The Canadian leader said Francis had reminded him that the pope's entire life "has been dedicated to supporting marginalised people in the world," and that he would work with Canadian bishops on finding a way forward.

Francis's predecessor pope Benedict XVI in 2009 expressed "sorrow" for the abuses in Canada. The first of the schools opened in 1874 and the last one closed in 1996.

Many survivors alleged abuse by headmasters and teachers, who stripped them of their culture and language.