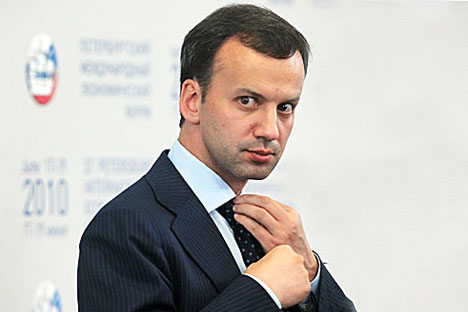 Syria was once self-sufficient in wheat production but continued fighting in the main grain-producing areas in its northeastern regions and poor rainfall halved the nation's harvest last year to 1.3 million tons, the lowest in 27 years.

Russia, one of the world's largest wheat exporters, supports Syrian President Bashar al-Assad in the long-running conflict there and has helped his government with wheat aid previously.

Dvorkovich, who is in charge of agriculture in the government, said in an interview at the annual international economic forum in St Petersburg that the proposal to consider new grain supplies to Syria was made by another Russian deputy prime minister, Dmitry Rogozin.

"It is at least several hundred thousand tons, quite a large amount," Dvorkovich said.

Syrian and Russian government sources said in March that Syria had received 50,000 tons of Russian wheat as humanitarian aid.

Commercial deals between Syrian buyers and Russian wheat suppliers have been complicated since last year. Several deals were signed but no wheat arrived under them.

Asked on Friday whether such cases could happen again, Dvorkovich said that "we ... are ready to do supplies from our stocks. One simply needs to agree on financial conditions."

He did not provide further detail.

The agriculture ministry was seeking government permission to export up to 500,000 tons of grain from its 4 million ton state grain stockpile to free up storage space before the new crop arrives, industry sources said told Reuters in March.

Asked about this proposal on Friday, Dvorkovich said the government had not taken a formal decision on this proposal.

"From my point of view ... it would be right to do it because there are requests from different countries, in different parts of the world on additional supplies from Russia. The question is only in the financial conditions," Dvorkovich said.

If such a decision is approved, it is possible that, to make such supplies "financially acceptable" for state trader United Grain Company, which operates the reserves, Russia would have to downgrade railway tariffs or decrease port tariffs because current grain prices are lower than the one at which the company bought the grain, Dvorkovich added.