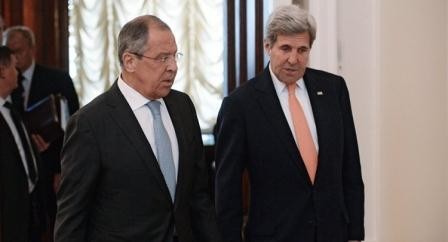 Russian Foreign Minister Sergey Lavrov and US Secretary of State John Kerry have held talks in New York, on the sidelines of the UN General Assembly. Syria was the main topic of the Wednesday talks, APA reports quoting sputniknews. The meeting is the second between Lavrov and Kerry on the sidelines of the 71st UN General Assembly. On Tuesday, Lavrov and Kerry had a short bilateral discussion ahead of the International Syria Support Group (ISSG) meeting.


German Foreign Minister Frank-Walter Steinmeier confirmed to RIA Novosti on Wednesday that the next ISSG meeting would be held on Thursday.


On Tuesday, UN Special Envoy for Syria Staffan de Mistura said after a meeting of the ISSG on the sidelines of the UN General Assembly in New York that the group would reconvene on Friday. On September 9, Lavrov and Kerry presented a new plan to regulate the conflict in Syria, which included a new ceasefire that came into force on September 12. On Wednesday, Lavrov stressed that the September 16 attacks by US-led coalition forces on Syrian army positions at a military airport near Deir ez-Zor were a flagrant violation of the ceasefire agreement