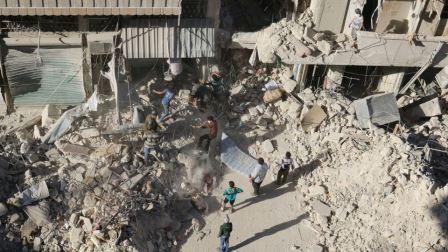 Syria dominated a trilateral meeting in Rome between the foreign ministers of Italy, France and Germany.

As dozens of civilians were again reported killed after heavy Russian bombing around Aleppo, some EU diplomats in Brussels have raised the prospect of more sanctions against Moscow.

Italy and several other EU countries had been in favour of re-engaging with Russia and easing sanctions over Ukraine. The EU has argued for keeping the two conflicts separate. But ties with Moscow over the military offensive on rebel-held eastern Aleppo have become strained further.

“We had gambled on the possibility that Russia would give a positive contribution to finding a solution for the Syrian crisis, having a positive influence on Assad’s regime. Especially after the last few weeks we must realise that’s not been the case,” the Italian Foreign Minister Paolo Gentiloni told a joint news conference.

France has said the Aleppo attacks amount to war crimes and wants Syria and Russia investigated.

But the country’s foreign minister said in Rome he did not back new sanctions against Moscow immediately.

“Our priority is not to enter in a cycle of sanctions just for the sake of sanctions. Our priority and determination is to convince everybody to stop bombing Aleppo and to allow access for humanitarian aid as quickly as possible, and to resume the political process as soon as possible,” Jean-Marc Ayrault added.

Germany’s foreign minister backed his Italian colleague in saying the responsibility of the Syrian government and its supporters had to be highlighted.

“It’s not just a question of our political responsibility. Seeing the images that every day come from Aleppo, seeing and hearing the news, this is also about our moral credibility,” Frank-Walter Steinmeier said. He added that the priority was to get the bombing stopped.

Despite repeated diplomatic failures and the West’s poisoned relations with Moscow, more international meetings are planned this weekend – with both the US and Russia present – to attempt to agree an umpteenth Syrian ceasefire.