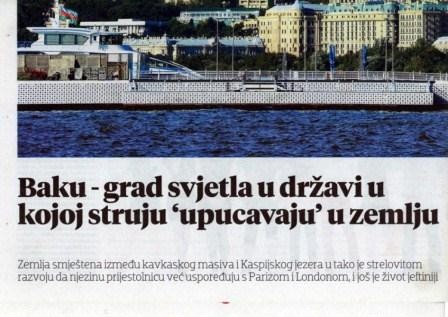 Croatian Večernji list daily newspaper has published an article highlighting Azerbaijan`s development by journalist Bernard Karakaš, who attended the 5th Baku International Humanitarian Forum. He provides an insight into the Armenia-Azerbaijan Nagorno-Karabakh conflict, occupation of the Azerbaijani territory by the Armenian military units, massacre of thousands of Azerbaijani civilians, emergence of more than one million refugees and IDPs, and four UN Security Council resolutions demanding liberation of Azerbaijan`s lands.

Karakaš hails Azerbaijan`s economic development, saying the country transformed into one of the world`s rapidly developing economies in a short span of time. He calls on Croatian businessmen to benefit from Azerbaijan’s economic potential, and points to the necessity of using “wide” economic potential of the two countries.

The Croatian journalist also writes about the beauty of the Azerbaijani capital. He calls Baku one of the most illuminated cities in the world, comparing it with Paris, London and Dubai.

Karakaš notes that Baku hosted Eurovision song contest, first European Games and Formula 1 race. He also commends the Azerbaijani government`s attention to preserving multicultural values and ensuring equal rights for representatives of all religions. The journalist says Baku is one of the few