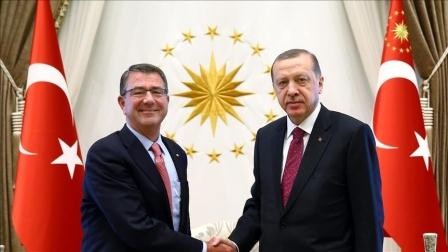 U.S. Defense Secretary Ashton Carter met Turkish leaders on Friday when he reaffirmed the countries’ alliance and congratulated Turkey on successes against Daesh in Syria.

Carter thanked President Recep Tayyip Erdogan for “Turkey's resolve in the fight against terrorism and Turkey’s critical support for the counter-ISIL campaign in Syria and Iraq,” the Pentagon said in a statement that used an alternative acronym for Daesh.


The pair, meeting at the Presidential Palace in Ankara, talked about recent successes against Daesh during Operation Euphrates Shield and Carter congratulated Erdogan on Turkey’s “critical role” in recently seizing Dabiq in northern Syria.

“Also discussed was the need to solidify and consolidate gains in Operation Euphrates Shield, to include increasing military cooperation and enhancing civilian and humanitarian work,” Pentagon spokesman Peter Cook said in the statement.


He expressed his condolences to the martyrs and their families and affirmed the U.S.’s “support for the long-term, strategic alliance” between the two countries, promising to “continue to stand side-by-side with NATO ally Turkey against shared threats.”

During his conversation with Carter, Yildirim stressed Turkey’s need to be involved in the operation to retake Mosul from Daesh, a source close to the prime minister said on condition of anonymity due to restrictions on talking to the media.

He also told Carter that Turkey was continuing its humanitarian efforts in Syria and working to resolve the civil war.