"Brexit talks should be conducted in French" 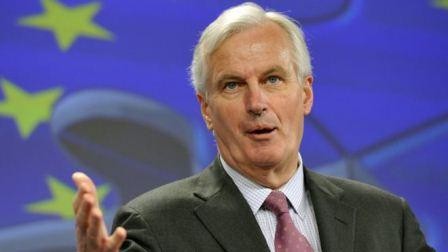 The European Union's lead Brexit negotiator wants British and EU officials to work in French rather than English during the divorce talks, an EU official familiar with Brussels' Brexit task force said on Friday.

Michel Barnier, the former French foreign minister running the complex separation with London, is keen that his native tongue be used in meetings and documents, the source told Reuters during a EU summit at which Theresa May was making her first appearance as prime minister at the European Council.

"Barnier wants French to be the working language in Brexit negotiations with Britain," the source said.

An EU spokeswoman stressed this was not an official line: "There is no language regime for the negotiations," she said.

A spokeswoman for May declined comment. "We will not comment until we receive a formal request," she said.

Using French marks a shift away from standard practice among multinational teams in Brussels, where French lost its status to English as the EU's main working language after northern and eastern states joined in the past two decades. Even officials from the EU's founding powers France and Germany now communicate with each other mainly in English.

It also sends a signal to May and her ministers that the EU plans to put its own interests first in negotiating divorce talks that the prime minister has promised to launch by March.

Barnier's boss, former Luxembourg premier and European Commission President Jean-Claude Juncker, who was to meet May over lunch on Friday, has said the Union must be "intransigent" in defending its principles during the talks.

Many British diplomats in Brussels are fluent in French but ministers and Whitehall officials share with their fellow Britons the distinction of being among the poorest linguists in Europe.

Other officials involved in preparing for Brexit said they were unaware of Barnier proposing to use mainly French. But some have said that his task force, currently numbering 15 staff and including no Britons, has been conversing mainly in French.

Barnier, who speaks fluent if accented English, was an unpopular choice for some British politicians when Commission President Jean-Claude Juncker appointed him. Some commentators described it as "an act of war".

As an EU commissioner until 2014, Barnier, 65, had a difficult relationship with London, as he sought to tighten regulation of Britain's dominant financial services industry. One British newspaper called him the "scourge of the City".

Some EU politicians have suggested that English might lose its status as one of three official working languages, along with French and German, as a result of Brexit. However, few see a realistic challenge to the global lingua franca even when Britons are no longer present in the European Union.