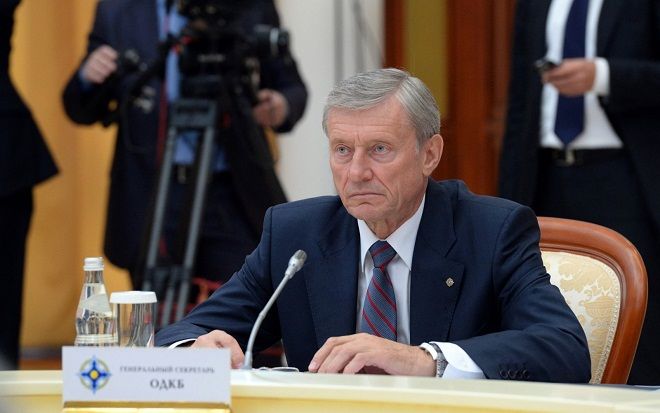 The Collective Security Treaty Organization called on Azerbaijan to disregard the expression “Nagorno-Karabakh Republic” used by CSTO Secretary General Nikolay Bordyuzha in the statement regarding the December 29 armed incident on the Armenian-Azerbaijani border.

The use of the expression “de facto Nagorno-Karabakh Republic” in the statement in no way implies its recognition, the CSTO press service told APA on Dec. 30.

“It’s more expedient to focus on the great concern CSTO expressed over the December 20 armed incident in the territory of Armenia that is a CSTO member country,” the press service said, noting that the CSTO secretary general’s expression is associated with the area of conflict.

CSTO supports all efforts of the OSCE Minsk Group to resolve the Nagorno-Karabakh conflict by peaceful means, the press service said. “It is also reflected in the joint statement made by foreign ministers of the CSTO member states in Yerevan in October this year.”

A reconnaissance group of the Armenian Armed Forces attempted to violate the Azerbaijan-Armenia state border on Dec. 29 morning. The Armenian group found itself in the ambush of the Azerbaijani army while violating the borders, Azerbaijan's Defense Ministry said in a statement.

The enemy suffered losses and had to retreat, according to the statement. A soldier of the Azerbaijani Armed Forces, Gurbanov Chingiz, went missing as a result of the Armenian provocation. Then, it was revealed that the Azerbaijani soldier was killed, and his body remained on the territory controlled by the enemy forces.

Azerbaijan’s Defense Ministry has already appealed to the ICRC Azerbaijan Delegation, the OSCE Minsk Group, and the Personal Representative of the OSCE Chairperson-in-Office Andrzej Kasprzyk to receive the body of the fallen soldier.