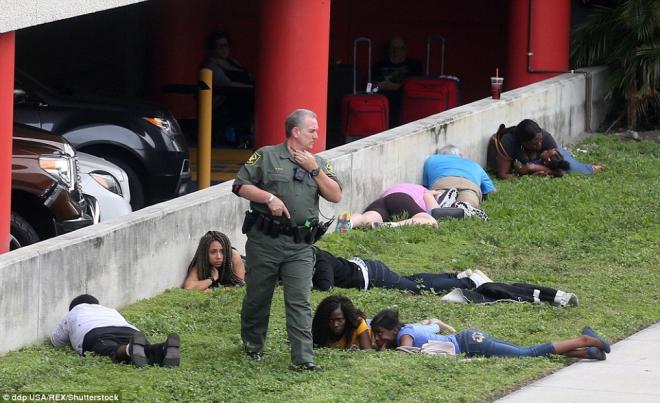 Police are investigating whether the lone shooter who opened fire at the Fort Lauderdale-Hollywood Airport in Florida was mentally disturbed or if he had any links to ISIS after he executed five people in the baggage claim hall with a gun he had checked in his luggage.

Gunman Esteban Santiago - an Iraq war veteran - was taken into custody after he opened fire in the lower level baggage claim area in Terminal 2 on Friday about 1pm.

Santiago flew into the airport from Anchorage, Alaska (with a layover in Minneapolis, St. Paul) on Delta flight 2182 with a firearm as his only piece of checked luggage. The 26-year-old, who was dressed in a Star Wars t-shirt, claimed his bag, went to the bathroom to load his handgun and then started shooting people dead.

Terry Andres, of Virginia, and Olga Woltering, of Georgia, were among those who were killed.

Mr Andres, a 62-year-old grandfather, was at the airport with his wife to go on a vacation, while Mrs Woltering was scheduled to leave on a cruise from Florida on Saturday with her husband Ralph to celebrate his 90th birthday.

Law enforcement are now investigating why Santiago was in Florida as they try to determine a motive for the shooting spree. FBI officials said late Friday they had not ruled out terrorism and were investigating all angles.

Santiago's relatives said the 26-year-old had a history of mental health issues - some of which followed his military service in Iraq several years ago.

Authorities said Santiago walked into an FBI office in Anchorage in November last year claiming the government was trying to control his mind and he was being forced to watch ISIS videos, CBS reports. After that incident, Santiago started getting treatment for his mental health issues.

He was previously pictured giving a one-fingered salute, which is commonly used by Islamic State jihadists often before they embark on a suicide bombing.

Santiago was also contacted by the FBI after an employer back in Alaska raised concerns about certain things he had said, according to ABC News

A private first class and combat engineer, he received half a dozen medals before receiving a general discharge for unsatisfactory performance in August last year.

His aunt Maria Ruiz told NorthJersey.com that Santiago had returned from Iraq acting strangely but had seemed happy after the birth of his child in September last year.

But she said something happened to him about a month ago and he was hospitalized for two weeks. She did not have details of his condition.

'Like a month ago, it was like he lost his mind. He said he saw things,' she said.

Santiago's brother Bryan Santiago said he could have suffered a 'flashback' from his time in Iraq, despite never being diagnosed with PTSD, NBC reports.