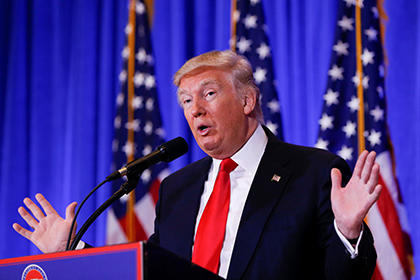 US President-elect Donald Trump says allegations Russia has compromising material on him is "fake news, phoney stuff", put together by "sick people".

Axar.az reports that, he was replying to allegations carried in some US media that his election team colluded with Russia and there were salacious videos of his private life.

In his first briefing as president-elect, he also said for the first time Russia had been behind hacking attacks.
He also confirmed handing total control of his businesses to his two sons.

The press conference was scheduled for Mr Trump to give details about his business affairs but was dominated by the allegations of the compromising material.

Mr Trump said the claims "should never have been written and should never have been released".
"It's all fake news, it's phoney stuff, it didn't happen," he said, saying that "sick people" had "put that crap together... it's an absolute disgrace".
He thanked the news organisations that chose not to run with the claims, which have been circulating for months.