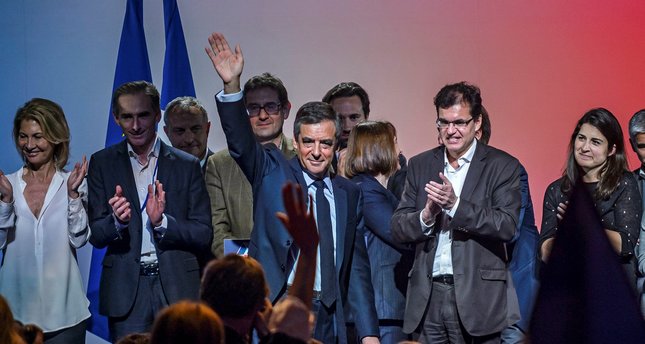 French presidential candidate Francois Fillon, fighting for political survival, called on supporters Saturday not to "abdicate" to those trying to destroy him as the Socialist mayor of Paris asked him to cancel a scheduled rally that would test his staying power.

Axar.az reports that, the conservative Fillon, whose campaign has been unraveling over impending corruption charges, vowed to remake France in a speech on Saturday, a day before what amounts to his last stand.

He will hold a rally Sunday near the Eiffel Tower widely seen as a way to measure support via the numbers he can muster. In a video tweeted Friday, Fillon called on his supporters to show up.

Fillon, once the leader in polls, is increasingly alone as backers defect. Two campaign heavyweights, campaign director Patrick Stefanini and campaign spokesman Thierry Solere deserted the Fillon team on Friday — though the director promised to stay on until the end of the rally.

Paris Mayor Anne Hidalgo tweeted that the event "endangers" French values, claiming its real goal is to demonstrate against investigative judges, police and journalists "bringing to light the truth."

"Our ties to liberty force us to denounce this rally as a grave act of moral and political failure, contrary to our values," Hidalgo's tweet said, noting that the event was being held at the Esplanade of Human Rights.

She wasn't the first to denounce the rally, in which a group linked to an ultra-conservative political movement, Common Sense, has "associated" itself.

Financial prosecutors are investigating allegations that Fillon gave his wife and two of their children taxpayer-funded jobs as his parliamentary aides that they never performed. Fillon initially said that he would step down if charged, but decided to maintain his candidacy even though he's been summoned to face charges on March 15.

His family members were paid more than 1 million euros ($1.1 million) over a number of years for work as his parliamentary aides. It is legal in France to hire relatives for public jobs, if they actually work. Fillon proclaims his innocence, insisting his wife and children worked for their pay.