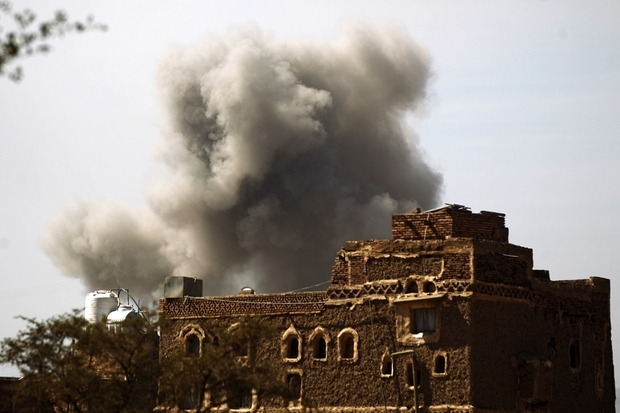 At least 22 civilians were killed on Friday and dozens wounded when a Saudi-led coalition air strike hit a market in western Yemen causing a fire to break out, a local official said.

Missiles launched by fighter jets of the Arab alliance hit a market selling the mild narcotic leaf qat, which is popular among Yemenis, near the Red Sea fishing town of Khoukha.

Rescue workers on Friday night were battling a blaze in the market caused by the attack and pulling bodies out of the rubble some of which were burned beyond recognition, according to Hashim Azazi, deputy governor of Hodeidah province.

"All of those killed were civilians, none were holding weapons," said Azazi.

A coalition spokesperson was not immediately available to comment.

Khoukha and the nearby city of Hodeidah are controlled by Iran-allied Houthi fighters who in 2014 overran Yemen's capital Sanaa and forced the Saudi-backed government of President Abd-Rabbu Mansour Hadi to flee into exile.

Yemeni government forces backed by Gulf Arab troops recaptured control of the southern Red Sea city of al-Mokha last month in a push that paved the way for an advance on Hodeidah, the country's main port city.

The Saudi-led coalition was formed in 2015 to fight the Houthis and troops loyal to former President Ali Abdullah Saleh who have fired missiles into neighboring Saudi Arabia.

Friday's attacks were the latest in a series of coalition-led strikes that have hit schools, hospitals, markets and private homes.

In December, the coalition acknowledged that it had made "limited use" of British-made cluster bombs, but said it had stopped using them.

Nearly half of Yemen's 22 provinces are on the verge of famine, according to the U.N. World Food Programme, as a result of the war that has drawn in regional rivals Iran and Saudi Arabia.