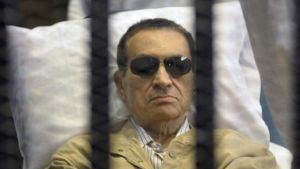 A prosecutor allowed Monday for Hosni Mubarak to be released, his lawyer said, after an appeals court acquitted Egypt's ex-president of involvement in the killing of protesters during the 2011 uprising.

Axar.az reports that "He can go home now when the doctors decide he is able to," Farid al-Deeb said, adding that Mubarak is banned from leaving the country pending an ongoing graft investigation.

Mubarak, 88, has spent most of his time detained at a military hospital in Cairo since his arrest in 2011.

Egypt's top appeals court on March 2 acquitted Mubarak of involvement in the killing of protesters during the revolt that toppled him, ending the final trial for the strongman who had ruled for 30 years.

He was accused of inciting the deaths of protesters during the 18-day revolt, in which about 850 people were killed as police clashed with demonstrators.

Mubarak was sentenced to life in 2012 in the case, but an appeals court ordered a retrial, which dismissed the charges two years later. His acquittal this month is final.

In January 2016, the appeals court upheld a three-year prison sentence for Mubarak and his two sons on corruption charges.

But the sentence took into account time served. Both of his sons, Alaa and Gamal, were freed.