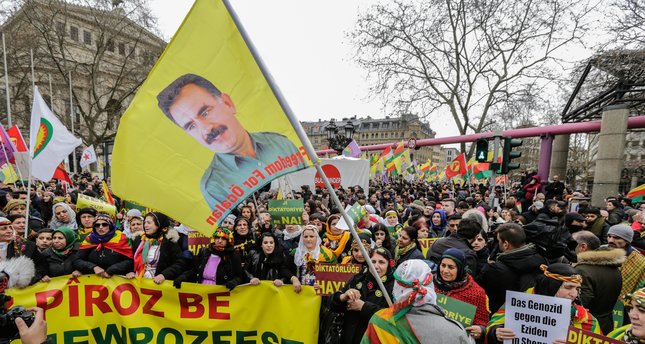 Axar.az reports that, around 9,000 people marched in the central German city of Frankfurt with banned PKK posters and flags, openly defying the federal government's prohibition of terrorist symbols in public places.

The PKK sympathizers also carried banned posters and flags even though the Interior Ministry on March 2 updated its list of prohibited PKK symbols to include the image of the terrorist organization's jailed head Abdullah Öcalan.

The group also promoted "No" vote in the upcoming April 16 referendum in Turkey as well as shouted slogans insulting the Turkish state.

A Frankfurt police statement said the group was permitted to carry out celebrations of Nevruz -- a spring new year festival -- in two parts of the city Saturday, adding that the main topics of the meetings were Nevruz, "Freedom for Öcalan," and "Freedom for Kurdistan."

This comes despite German authorities blocking nearly two dozen planned rallies by Turkish government ministers or politicians ahead of an April 16 referendum on constitutional changes in Turkey.

Presidential spokesman Ibrahim Kalın has "strongly" condemned German authorities for allowing the march. In a written statement, he said it is ''not possible to explain for German authorities to claim that Turkey's elected representatives' meeting with their citizens is dangerous, but treating terrorists as legitimate actors.''

"It is clearly supporting terrorism," Kalin added. "Those, who try to explain this hostile attitude with freedom of expression and assembly, should act seriously."

The presidential aide said some European countries, considering what happened in Frankfurt on Saturday, "try to interfere the referendum that will take place on April 16 in Turkey and took up a position in favour of 'No' vote."

"We once again remind European countries that Europe will not decide in April 16, Turkish nation will."