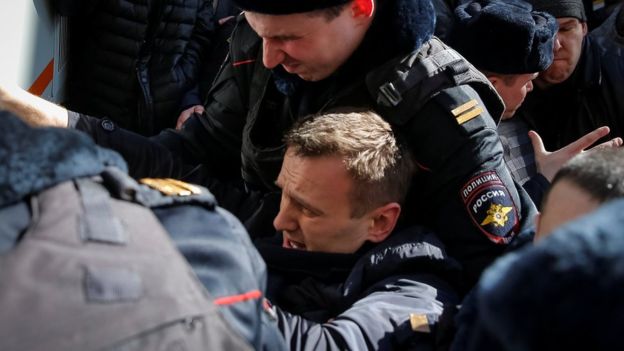 Russia's main opposition leader, Alexei Navalny, has been arrested at an anti-corruption protest he organised in the capital, Moscow.

At least 500 other protesters were detained in the capital and across the country. Most of the marches were illegal, organised without official permission.

Hundreds of other protesters have been detained across the country, activists say. TV pictures showed demonstrators chanting "Down with [Russian President Vladimir] Putin!", "Russia without Putin!" and "Putin is a thief!".

Correspondents say the marches appear to be the biggest since anti-government demonstrations in 2011/2012. Alexei Navalny was detained as he arrived to join the rally in central Moscow. Protesters then tried to prevent a police van from taking him away.

In a tweet after his detention, he urged fellow protesters to continue with the demonstration.
"Guys, I'm fine. No need to fight to get me out. Walk along Tverskaya [Moscow main street]. Our topic of the day is the fight against corruption," he said (in Russian).