Massive protest in Hungary against bill 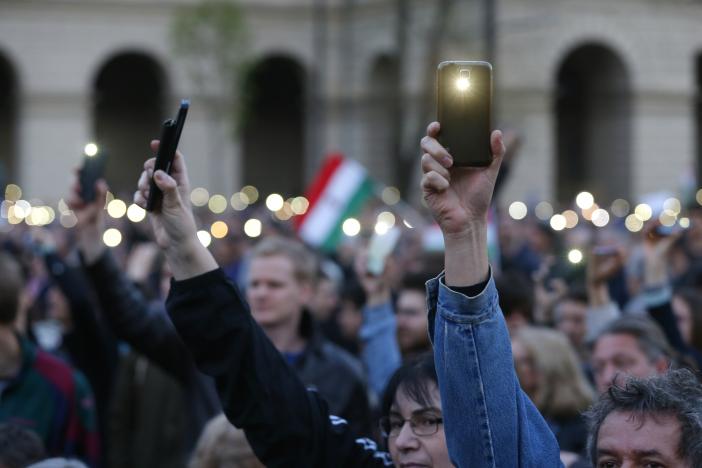 Hungarians rose up in one of the largest protests against the seven-year rule of right-wing Prime Minister Viktor Orban on Sunday, protesting against new legislation that could force out of the country one of its top international universities.

Axar.az reports that the Central European University (CEU), a school founded by U.S. financier George Soros, could be forced to leave Hungary after a bill passed in Parliament this week by Orban's Fidesz party set stringent, new conditions under which it must operate.

The bill has led to criticism from hundreds of leading academics worldwide as well as from the U.S. government and the European Union.

The protest drew some of the largest crowds against Orban's seven-year rule, with organizers estimating attendance around 70,000. The crowd marched across a bridge over the river Danube and filled the square outside Parliament, which was defended by several lines of police, some in riot gear.

Thousands of people, mostly students, stayed on after the main protest for an unannounced march on the building of the Education Secretariat, then on to the headquarters of Fidesz, where where they chanted anti-Fidesz slogans before, with numbers dwindling, they blocked Oktogon square, a busy intersection in central Budapest.

Though passionate, the protest remained peaceful throughout.

Hungarian President Janos Ader must now sign the bill by Monday to make it law. The protesters said they wanted to convince Ader to reject the bill and refer it to a constitutional review.

"What do we want Ader to do? VETO," the crowd chanted. "Free country, free university!"

"The government wants to silence pretty much everyone who doesn't think the same as them, who thinks freely, who can be liberal, can be leftist," protest organizer Kornel Klopfstein, a PhD student at the University of Bielefeld in Germany, told Reuters.

"According to the government one of the centers of these people is at CEU... We should stand up for academic freedom and for CEU."

The students sat down on the pavement and chanted slogans like "Here is the end, Viktor", or "Fidesz is dirty".