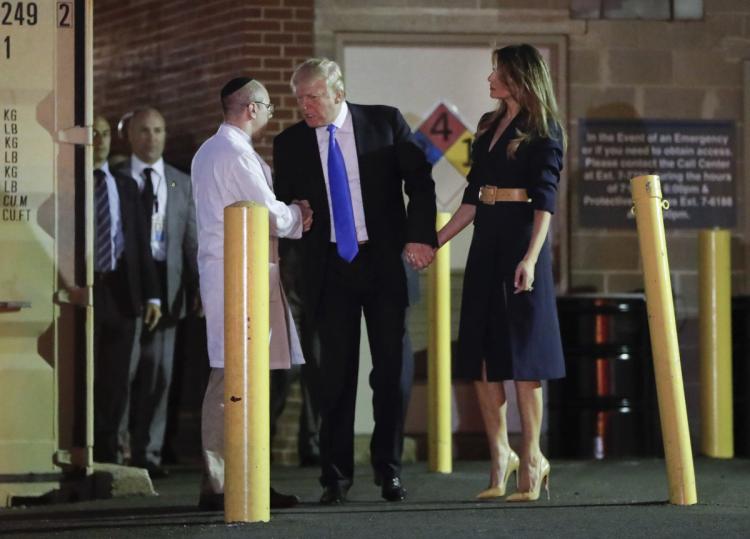 President Donald Trump visited House Majority Whip Steve Scalise in the hospital Wednesday night, after the Louisiana Republican was shot at a congressional baseball practice earlier in the day.

According to a series of press pool reports, the president arrived with first lady Melania Trump and press secretary Sean Spicer at MedStar Washington Hospital Center in Washington, where Scalise is recovering from surgery after suffering a bullet wound to his hip. Scalise, one of five people wounded in the stunning attack congressional baseball practice in Alexandria, Virginia, remained listed in critical condition.

The Trumps met with Scalise's doctors, including Ira Rabin, vice president for medical operations, according to the pool reports, in addition to speaking with Scalise's wife, Jennifer. The president and first lady sat at Scalise's bedside.

The Trumps also met with Capitol Police Officer Crystal Griner, who was also wounded in the attack, and her wife. Griner and fellow officer David Bailey were wounded in an extended gunfight with shooter James Hodgkinson, who was fatally wounded.

During the hospital visit, aides carried two "big bouquets of white flowers," according to the pool reports. Melania Trump offered Scalise's family one of the bouquets. The other bouquet was offered to Griner's family.

The first couple also talked to Capitol police officers who were at the hospital.
ADVERTISING

Scalise's office said earlier in the day the congressman was "in good spirits" before undergoing surgery. However, the medical facility later reported that the lawmaker remains in critical condition.

"Congressman Steve Scalise sustained a single rifle shot to the left hip," an evening statement from the hospital read.

"The bullet travelled across his pelvis, fracturing bones, injuring internal organs, and causing severe bleeding. He was transported in shock to MedStar Washington Hospital Center, a Level I Trauma Center. He underwent immediate surgery, and an additional procedure to stop bleeding. He has received multiple units of blood transfusion."

"Just left hospital. Rep. Steve Scalise, one of the truly great people, is in very tough shape — but he is a real fighter. Pray for Steve," Trump tweeted at 9:41 p.m. following his visit to the hospital.

Trump does not plan to attend the congressional baseball game Thursday night due to security and logistical concerns. The annual game pitting Democrats vs. Republicans is to be played at Nationals Park.

“While the president would like to attend the game and show his support for all of these brave public servants, he has been advised that there is not enough time to follow Secret Service protocols," Spicer said, according to the pool reports.