US calls on UNSC to prevent use of chemical weapons 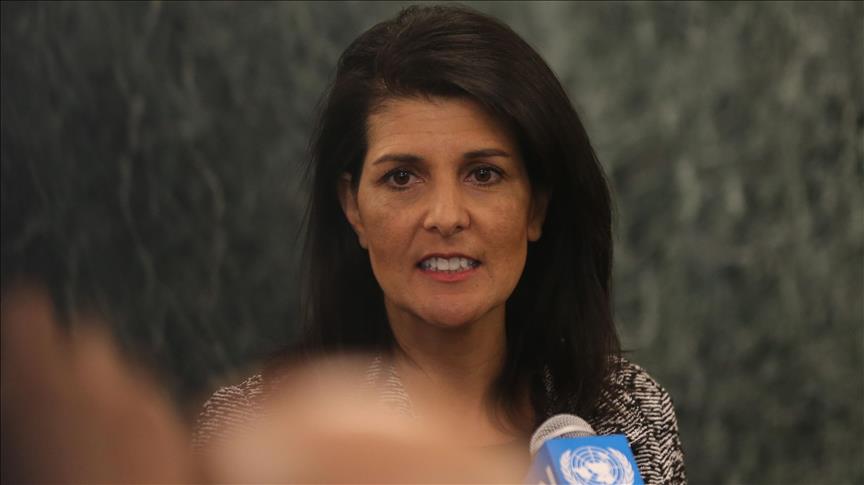 The U.S. Ambassador to United Nations Nikki Haley on Friday called on the Security Council to "put aside political games" and meet a responsibility to prevent the use of chemical weapons.

Axar.az reports citing AA that Haley said if the Security Council does not take action, the mandate for the Joint Investigative Mechanism (JIM) would be compromised.

"We can see the confirmation of chemical weapon usage on innocent civilians in Syria once again. Unless the Security Council takes immediate action to renew the mandate for the JIM, there will be no independent, impartial tool to identify who is responsible for these terrible attacks," she said.

U.S. efforts to extend JIM's mandate will continue, she said. "Security Council members must put aside political games and meet our responsibility to protect the world against chemical weapons use."

The investigation by the UN and the Organization for the Prohibition of Chemical Weapons, known as the JIM, was created by the Security Council in August 2015 following reports of chemical attacks in Syria.

The U.S. is requesting a two-year extension of the JIM mandate that expires Nov. 17.

Separately, Russia requested the mandate be extended for just six months and a new investigation to replace the current independent report from expert investigators on Bashar al- Assad regime's use of sarin gas in Khan Sheikhun in April.

Reports of chemical attacks on civilians and opposition fighters in Syria have continued to emerge since an attack in August 2013 killed more than 1,400 victims in East Ghouta near Damascus.

The Syrian Network for Human Rights said it documented at least 174 chemical attacks since September 2013 when the Security Council issued a resolution to the dismantle Syria's chemical weapons arsenal.