Yildirim meets head of UN in New York during US trip 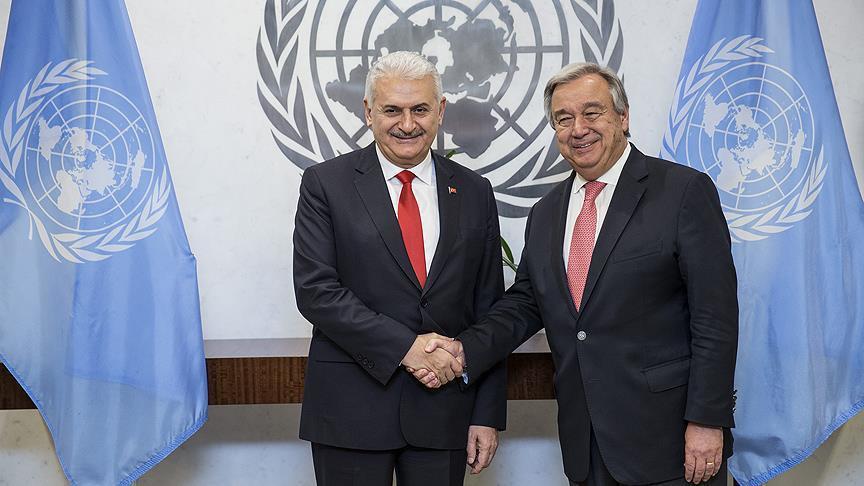 Prime Minister Binali Yıldırım met with Secretary-General of the UN Antonio Guterres in New York late Thursday over international issues in the region and the Rohingya Muslims.

"Mr. Secretary General [Antonio Guterres] expressed that the consequences of instability in the region and the burden of the refugee crisis is met with great sacrifice by Turkey," Yildirim told reporters following the meeting at the UN Headquarters in Manhattan. "Of course, our expectation is that all the members of the United Nations should share this burden."

Yildirim said he also urged the UN to prompt the international communities to take action on the ethnic cleansing of Rohingya Muslims in Myanmar, emphasizing that it is imperative to make a decision in this regard.

The Rohingya refugees are fleeing a military operation in which security forces and Buddhist mobs have killed men, women and children, looted homes and torched Rohingya villages.
“On the other hand, we told them that humanitarian aid distribution for these people [Rohingya], who fled their lands should be done under the UN coordination and also assist them for returning to their homeland,” he continued.

Since Aug. 25, over 611,000 Rohingya have crossed from Myanmar's western state of Rakhine into Bangladesh, according to the UN.

He also said that the voice of the Rohingya Muslims is not be heard sufficiently and Turkey would continue bringing the ongoing ethnic cleansing to the attention of the world public, Yildirim added.

According to Bangladeshi Foreign Minister Abul Hasan Mahmood Ali, around 3,000 Rohingya have been killed in the crackdown.

Describing the meeting as successful and productive, the Turkish Prime Minister said that they also had a chance to evaluate some regional issues such as settlement process in Cyprus, Libya, Iraq and Syria in a comprehensive way.

After the meeting with U.S. Vice President Mike Pence at the White House earlier on a same day, Yildirim and the Turkish delegation left to New York.

At a meeting held in Turkey's Consulate General in New York, Yildirim met with 12 prominent representatives of the Jewish community. The meeting was closed on press.