Dozens of Palestinians injured in clashes with Israel 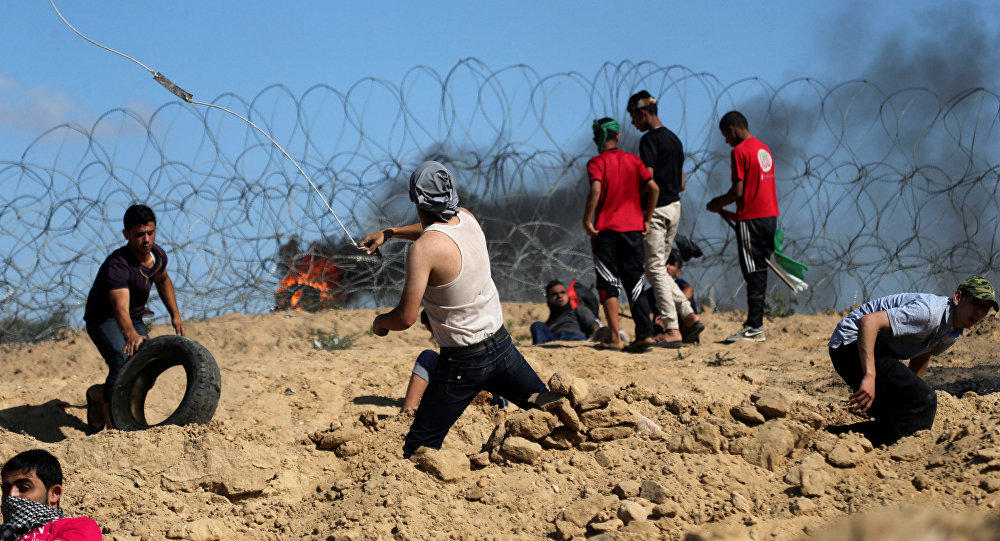 A total of 177 Palestinians have been injured in a new wave of clashes with the Israeli servicemen in the West Bank and in the Gaza Strip, mostly due to the use of tear gas, local medical organizations told.

According to the Palestine Red Crescent Society’s figures, a total of 164 Palestinians were injured in the clashes that took place in the West Bank on Friday.

Another 13 Palestinians were injured during the clashes at the Gaza Strip's border with Israel, Gaza Health Ministry spokesman Ashraf Kidra told Sputnik.
Meanwhile, palestinian militants fired a projectile from the Gaza Strip targeting the territory of Israel, the press service of the Israel Defense Forces (IDF) said on Friday.

"Moments ago, following sirens that sounded in the Sha'ar HaNegev Regional Council, a rocket fired from the Gaza Strip at Israel was identified," the statement read.

No information about casualties or material damages were provided.

Earlier in the day, the Israeli Air Force hit a Hamas observation post in the Gaza Strip in response to a rocket shelling from the enclave against Israel.

Rocket launches from the Gaza Strip have intensified following US President Donald Trump’s decision to recognize Jerusalem as the capital of Israel on December 6, 2017. The Israeli authorities blame the Hamas movement for rocket attacks, demanding compliance with the ceasefire by all the Palestinian factions.
For decades, Israel has been in conflict with the Palestinians, who have been seeking diplomatic recognition for their independent state on the territories of the West Bank, including East Jerusalem, which are partially occupied by Israel, and the Gaza Strip.

Tensions between Israel and Palestine have flared up after US President Donald Trump announced in December that the United States would recognize Jerusalem as the capital of Israel and relocate the US embassy to the city from Tel Aviv. Since then, the clashes between Palestinians and the Israeli forces take place on almost everyday basis.