"Azerbaijani multiculturalism and tolerance is a model" 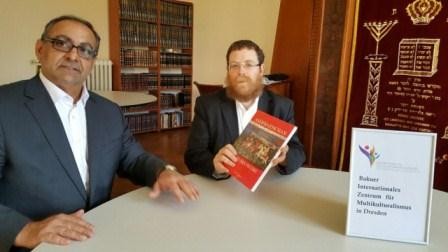 On the background of growing global instability the multiculturalism and tolerance in Azerbaijan based on the coexistence of different religions and nationalities is a model for everyone, said rabbi of the Land of Saxony in Germany Shneor Avlin as he met with Advisor to the Dresden branch of Baku International Multiculturalism Centre Aghahuseyn Babayev.

Briefing the rabbi on the Drezden branch's activities and goals, Babayev provided an insight into Azerbaijan's model of multiculturalism and state policy implemented in the country under the leadership of President Ilham Aliyev in this area. He said that Azerbaijan's model of coexistence was being studied at the world's leading universities, including the University of Augsburg in Germany.

Expressing his regret over the recent events in Armenian-occupied Azerbaijani lands early April, the rabbi Avlin said that he shared the pain of the Azerbaijani people as a representative of the Jewish people. He also described Holocaust and Khojaly massacres the most terrible genocides of the 20th century, saying they are tragedies of both nations. He expressed his regret that no fair, legal assessment was given to the genocide yet.

Stressing the importance of the opening of Dresden branch of Baku International Multiculturalism Centre, the rabbi Avlin wished the center success in future activities.