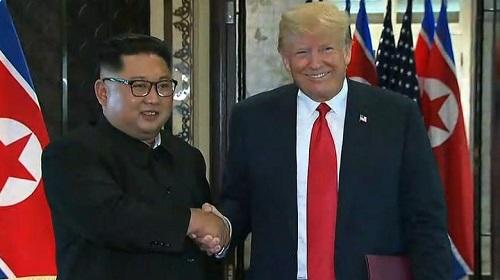 US President Donald Trump confirmed that his next meeting with North Korean leader Kim Jong Un will take place on February 27-28 in Vietnam.

"Chairman Kim and I will meet again on February 27 and 28 in Vietnam," the US leader said during his annual State of the Union Address. Trump did not specify in which city the meeting will take place.

According to Trump, Washington has embarked on a "bold new diplomacy," aiming to make a "historic push for peace on the Korean Peninsula."

He said that during his presidency, US citizens detained by North Korea "have come home," while North Korea’s nuclear tests and missile launches have been suspended.

"If I had not been elected president of the United States, we would right now, in my opinion, be in a major war with North Korea," the US president went on.

He said that "much work remains to be done" to achieve the goal of denuclearization on the Korean Peninsula. "But my relationship with Kim Jong Un is a good one," Trump added.

Meanwhile, US Special Representative for North Korea Stephen Biegun arrived in Pyongyang on Wednesday morning to prepare the meeting, a TASS correspondent reported.

The plane with the US envoy on board landed in the Pyongyang Sunan International Airport at 10:00 local time (04:00 Moscow time). After the official greeting ceremony, Biegun headed to Pyongyang, where he is to hold talks with North Korean officials.

On June 12, 2018, Singapore hosted a historic meeting between North Korean leader Kim Jong Un and US President Donald Trump. The parties signed a joint document, in which Pyongyang committed to denuclearizing the Korean Peninsula in return for US security guarantees.

At present, the second summit is being prepared by Washington and Pyongyang. The Vietnamese city of Da Nang, which hosted the Asia-Pacific Economic Cooperation (APEC) summit in 2017, was named as a likely venue.