Negotiations should be started with Azerbaijan 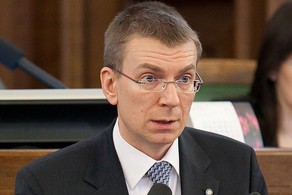 Latvian Foreign Minister Edgars Rinkevics indicated the need to start negotiations on the EU Association with Azerbaijan and Armenia.

"The citizens of the Eastern Partnership countries must feel practical benefits from cooperation with the EU," said the Latvian foreign minister, while emphasizing that the implementation of agreements on the deep and comprehensive free trade area, visa liberalization, and closer sectoral cooperation are the right and necessary steps that the EU must take.

Rinkevics called for broader cooperation in transport, transit, energy, commerce, health and the IT sector. "The partners' resilience must also be further strengthened through support for the reform process, the promotion of public engagement, opportunities for interconnections and market access, and enhancement of strategic communication capabilities," Rinkevics said.