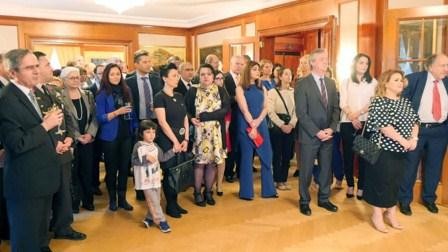 Azerbaijani Embassy in Vienna has organized an official reception to commemorate the 98th anniversary of the Azerbaijan Democratic Republic. Austrian state and government officials, representatives of the diplomatic corps, international organizations in Vienna, business circles, as well Azerbaijani compatriots attended the event.

Galib Israfilov emphasized that the present dynamic development of Azerbaijan is the result of right statehood policy and reforms carried out by Heydar Aliyev. He also underlined that the successful continuation of this policy by President Ilham Aliyev has ensured the implementation of a number of major energy and transport projects in Azerbaijan.

“At the same time, Azerbaijan has great significance in ensuring stability in the region”, Galib Israfilov added.

Following the event, the guests were familiarized themselves with samples of the Azerbaijani cuisine.