"World Association of Azerbaijani Businessmen should be created" 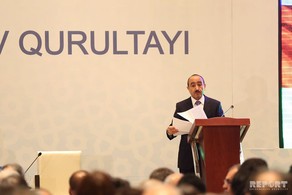 "It's time to establish the World Association of Azerbaijani Businessmen. The conference of the association should be held in Baku."

He said that it's very important to create the World Association of Azerbaijani Businessmen: "President Ilham Aliyev has invited Azerbaijani businessmen in the world to Azerbaijan, called them to invest in the country.

World Azerbaijanis should integrate into their communities. Then the activities of the Azerbaijanis became stronger, they became known in the community. Businessmen from foreign countries can finance campaigns of candidates for the parliamentary elections. We should use their potential."