US to step up efforts to settle Karabakh conflict 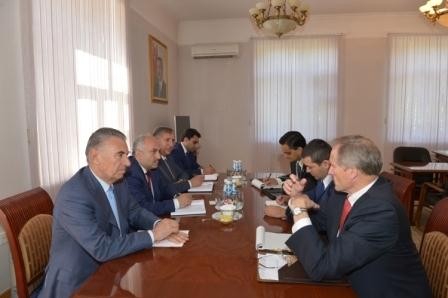 Azerbaijan's Deputy Prime Minister, Chairman of the State Committee for Work with Refugees and IDPs on Friday met with US Ambassador to Azerbaijan Robert Cekuta.


Cekuta said he visited the Yevlakh, Barda, Goranboy, and Terter district following the April clashes and met with IDPs there, the state commission told local media.


He added the US will step up its efforts to make sure the latest events are not repeated again.


Ali Hasanov in his turn said Armenia cultivates narcotic plants in the occupied territories and buy weapons with the money obtained.


He stressed that there is a union between Azerbaijan’s people and army, as a result of which these attainments were achieved in early April.


“The Armenians need to understand that there is no way except going for peace. The Armenian people too have always wanted this problem solved but the fascist regime does not allow this to happen, because they have come to power over this problem. Sometimes the OSCE Minsk Group co-chairs say there is a need for mutual trust in order for the two people to live side by side again. But they need to know that these two peoples have lived as neighbors for two centuries and it has to be so again. If the OSCE Minsk Group conducts a survey between the peoples, they will see the reality,” said the deputy PM.

Cekuta noted that despite the continuation of the Nagorno-Karabakh conflict and the difficult situation faced by IDPs, Azerbaijan has done much to address the problems of refugees and IDPs.

The ambassador stressed that the US is serious about the settlement of the Nagorno-Karabakh and is following the ongoing developments on the contact line of Azerbaijani and Armenian troops.


He added that the US, as a co-chair of the Minsk Group, will speed up efforts to resolve the Nagorno-Karabakh conflict peacefully.


Hasanov emphasized that Azerbaijan stands for a peaceful solution to the conflict.