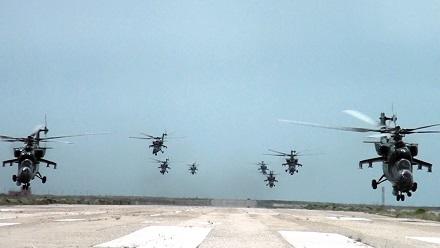 According to the plan approved by the President of the Republic of Azerbaijan, Commander-in-Chief of the Armed Forces Ilham Aliyev, the large-scale operational-tactical exercises with the participation of various types of troops, units, unions and units of the Azerbaijani Army led by Defense Minister, Colonel-General Zakir Hasanov ended on 24 May.

Axar.az informs that, the main theme of the training, which began on May 20, was the overthrow of the enemy's night-time attack, rebels in different directions, and attacks on our troops.

The training involved about 10,000 personnel, 150 tanks and other armored vehicles, about 200 missiles and artillery units of various caliber, flare-jet reactive systems and mortars, 35 aircraft and helicopters.

Organization of reconciliation of tank, aviation, rocket and artillery parts as well as other combat elements in the combat training exercises in various landfills in difficult landfills, night time and complex radioelectronic conditions, application of decent and special maneuver forces in the depth of enemy protection, improving the skills of management bodies, the tasks on moral-psychological support of the staff were implemented.

All activities have been carried out by providing accurate interaction between the troops involved in the training at night and in climatic conditions.