Azerbaijan presents its ‘capital of folklore’ 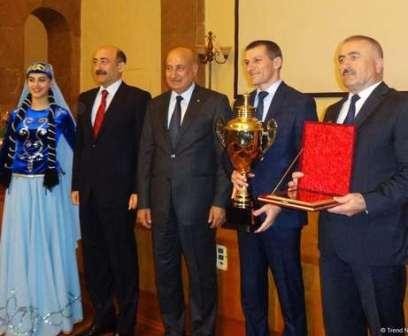 The capital of Azerbaijan’s folklore 2016 was solemnly presented at the Museum Center in Baku.

Gusar, the country’s majestic region in the north, was honored with the title of the capital of Azerbaijan’s folklore, welcoming scientific and practical conferences, round tables, concerts, competitions, festivals, exhibitions, info-tours and other events during this year.

The inauguration ceremony was attended by Culture and Tourism Minister Abulfaz Garayev, Abdulaziz Othman Altwaijri, director general of the Islamic Educational, Scientific, and Cultural Organization (ISESCO), as well as by prominent public figures, and representatives of Gusar region’s executive power.
Garayev, addressing the event, stressed that the region will hold the title in accordance with the "Folk Art Capitals" program by the Culture and Tourism Ministry.

He informed that the program is aimed at preserving and supporting the intangible cultural heritage of Azerbaijan, promoting folk art, as well as developing internal and external tourism.

Gusar has all the conditions necessary for ecological tourism, and here tourists might observe historical monuments and samples of folk art in the village of Anig, as well as become familiar with samples of folk art and the traditions of the local population.