"Leader and his period” book presented in Greece 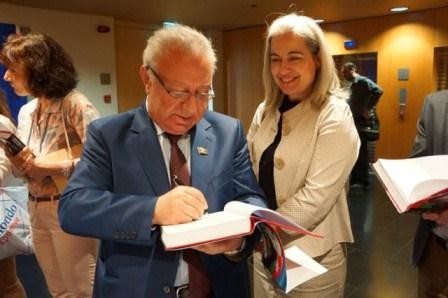 As earlier reported, presentation of the book “Heydar Aliyev: Leader and his period” was held in Greece. The presentation was attended by public and diplomatic representatives of the country.

In his opening remarks, Azerbaijan’s ambassador to Greece Rahman Mustafayev said the translation of edition is an example to the friendship between the two nations.

Continued with a documentary narrating on the Great Leader, the event saw performance of Azerbaijani music by Aytaj Shikhalizade, conducted by the Athens Conservatory orchestra.

Supported by the Embassy of Azerbaijan in Greece, the new edition of the book "Heydar Aliyev" from "Life of Remarkable People" series, by MP, writer Huseynbala Miralamov and Victor Andrianov, has been translated into the Greek language by Dimitris Patelis and Panayota Materi from the Russian language and published at the “Enalios” Publishing House.

Speaking of the book, author Huseynbala Miralamov said the project was carried out as part of celebrations of the 93rd jubilee of the outstanding politician, prominent statesman and national leader of Azerbaijan Heydar Aliyev. The book has been translated into 38 world languages.