Book on Azerbaijan launched in Beijing 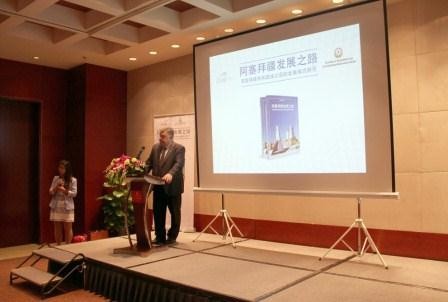 A Chinese version of "Azerbaijan's Path of Development" book has been presented in Beijing, China.

The event was co-organized by the Embassy of Azerbaijan in China and Center for Strategic Studies under the Azerbaijani President (SAM).

Participants in the event included representatives of the Chinese government bodies, research centers, higher education institutions, organizations and the diplomatic corps in Beijing, including ambassadors of Ukraine, Georgia and Moldova, as well as media representatives.

Addressing the ceremony, Azerbaijani Ambassador to China Latif Qandilov, deputy head of the foreign relations department of the Presidential Administration Arastu Habibbayli, director of SAM Farhad Mammadov, vice president of Chinese Institutes of Contemporary International Relations Feng Zhongping, Chairman of the Silk Road Chamber of International Commerce Lu Jianzhong, Professor of Wuhan University Liu Zaiqi, Georgian Ambassador to China David Aptsiauri stressed the importance of the book for the Chinese society as a source of substantial information about Azerbaijan. They described Azerbaijan as a country with ancient history and rich culture. The speakers highlighted Armenia`s military aggression against Azerbaijan, saying it was thanks to outstanding statesman Heydar Aliyev's return to political power and his far-sighted policy and leadership that Azerbaijan coped with the threat of collapse and embarked on the path of development.

"Oil contracts signed with major world companies opened new opportunities for the overall development of Azerbaijan. Large-scale energy and transport projects initiated by the national leader and realized under the leadership of President Ilham Aliyev have turned Azerbaijan into the regional leader."

Azerbaijan, which supports the Silk Road Economic Pipeline project initiated by China, could significantly contribute to the realization of this initiative as an important part of the East-West and North-South transport corridors, the speakers said.