Hybrid power plants to launch in all regions 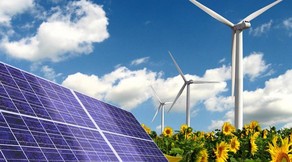 Greenhouse gas emissions dropped to ¼ during last 10 years as a result of diversification of energy sources in Azerbaijan.

“Beyond its oil and gas reserves, Azerbaijan is also rich with its alternative and renewable energy sources. These resources will enable to supply 100 percent renewable energy to all customers in 2050”, said N.Yusifbeyli.

According to him, tangible achievements for diversification of energy sources have been reached during last years.

Deputy chairman noted that efficiency of power supply system rose from 32 to 42 percent after implemented improvements.

N.Yusifbeyli noted that development of sustainable energy sources are implemented in three steps.

Talking about Gobustan hybrid power plant which produces three types of energy, he underlined that the main advantage of this approach is that it enables to integrate alternative energy sources to mainstream power system. N.Yusifbeyli noted that thanks to this approach regular supply volume increased by 12-14 percent.

According to him, such plants will be launched in all regions of Azerbaijan.