Land of Fire can earn billions on tourism 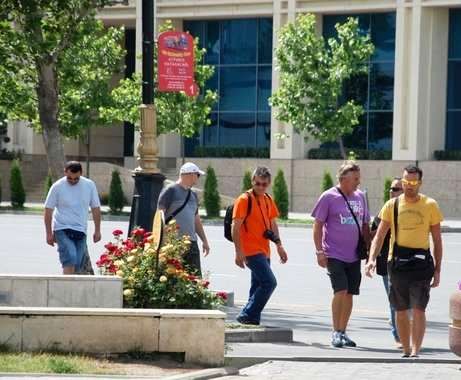 Over the past few years, Azerbaijan’s tourism sector has experienced continues growth and growing investments, and turned into one of the fastest growing sectors in the national economy.

Many international agencies have already recognized the impacts the tourism sector brought into Azerbaijan’s economic, socio-cultural, and infrastructure sector.

The World Travel & Tourism Council (WTTC), in its 2016 report analyzing data from previous years and providing a forecast for the future, stated that Azerbaijan has made significant progress in the tourism sector.

The experts predict 6.4 percent of growth in Azerbaijan’s tourism sector in 2016, expecting that the country will generate 2, 848 billion manats ($1,875 billion) due to foreign tourists. As for foreign visitors, their number can reach 2, 67 million this year.

Giving a forecast for 2026, the WTTC expects that Azerbaijan, also known as the Land of Fire, will derive more than 5 billion manats (about $ 3 billion) on foreign tourists, whose number will reach 3,37million in that year.

Meanwhile, the WTTC experts predict decline in the domestic tourism, reporting that residents of the country will spend 1, 460 billion (about $961) on travel and tourism during this year.

Chairman of Azerbaijan Tourism Association (AzTA) Nahid Bagirov , in turn, said that the number of tourists is growing by 20-30 percent every year and over the next five years the flow of tourists will increase by 100 percent.

“Income from this sector will exceed 4 billion manats ($2.6) under our calculations. By predicating this data, we mean only tourists, who come to rest in the country, we do not take into account those who come on a business trip” he told local media.

He said Azerbaijan has many attractions, which are very popular among foreign tourists including Shirvanshakh Palace, Atashgah, Gobustan, Heydar Aliyev Center and Flame Towers. But for the attraction of more tourists, Bagirov regards it’s necessary to develop the restaurant culture, taking into consideration the variety of the national cuisine.

“Azerbaijani dishes are very popular among tourists, but apart from the food, people are looking for a show. Therefore, the capital city and regions should open appropriate restaurants that will not only provide delicious food, but also show, which will display our traditions, folk dances and music. This is practiced in many countries, in particular Turkey and Georgia,” the AzTA chairman said.

The expert also talked about the ongoing projects in tourism sphere, which will soon be presented to public: “But we do not want to disclose all the secrets.”

“One of the most attractive tourist objects will appear in Gobustan. And the best PR for the country is carrying out major international events such as inaugural European Games, Eurovision and Formula 1, which will be held in the capital this year. Moreover, tourists coming to these events, then tell about the country to their friends, and thus the interest is growing with each passing day,” Bagirov emphasized.

Many experts claim that the devaluation of the national currency manat, has created favorable conditions for the development of tourism.

They say hotels and restaurants have become much more affordable in comparison to previous years, noting that the country should carefully approach to this positive phenomenon.

Chairman of the Centre for Sustainable Development Studies Nariman Agayev said that the number of hotels for people with an average income are increasing. “If 3-4 years ago, we had nothing to offer to foreign tourists besides expensive luxury hotels, then the situation has changed today,” he said.

In neighboring Georgia hotels of this price series appeared long ago, but in Azerbaijan the process its little bit slowly, according to the expert.

“But today we can observe that small 10-15-room hotels have also began to appear in Baku, a room that can be rented for an average of $35-60 per day,” Agayev said.

The Culture and Tourism Ministry says that Azerbaijan is able to accommodate from 35,000 to 40,000 tourists per day.