The Netherlands invests $900M in Azerbaijan 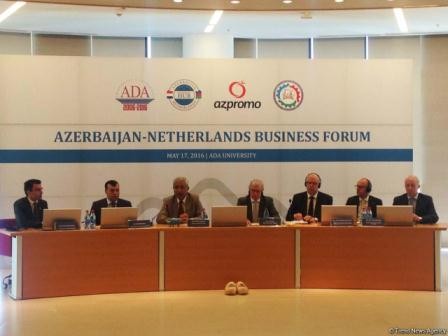 The total volume of investments made by the Netherlands in Azerbaijan is $900 million, Azerbaijan's Deputy Economy Minister Sahil Babayev said on May 17.

He made the remarks during the Azerbaijan-Netherlands business forum in Baku.

Babayev noted that over a third of the total volume of investments was made in Azerbaijan's economy over the last three years.

He added that the Dutch companies actively participate as contractors in public contracts.

"The Dutch companies have signed contacts worth $180 million in Azerbaijan in recent years," said Babayev.

Member of the Dutch Senate Rene van der Linden, for his part, said that his country can contribute to the development and diversification of Azerbaijan's economy.

"For his purpose, first of all, it is necessary to develop the relations between our countries' companies," he said, adding that currently, the companies of Azerbaijan and the Netherlands have short-term relations, but they can turn into strong and long-term ties in the future.