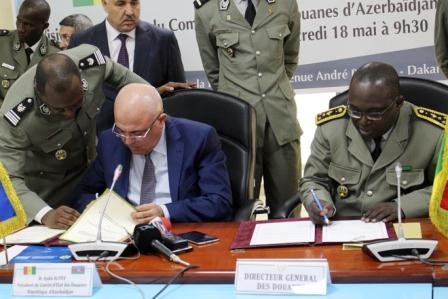 Azerbaijan's State Customs Committee (SCC) and Senegal's General Administration of Customs signed an agreement on mutual aid in the field of strengthening the capacity of customs officials, the SCC press service said.

From the Azerbaijani side the document was signed by the Chairman of the SCC, customs service Lieutenant-General Aydin Aliyev and from the Senegalese side by the Director General of the General Customs Administration Papa Ousmane Gueye.

The SCC delegation led by Aydin Aliyev was on a visit to Senegal at the invitation of the country's General Administration of Customs.

Issues of development of cooperation between the two countries' customs services were discussed during the meeting.

Papa Ousmane Gueye said that the Senegalese side is interested in studying the experience of Azerbaijani colleagues and cooperation in all areas of customs.

Aydin Aliyev, in his turn, noted that along with the diplomatic relations between the two countries, bilateral relations in economic and other spheres also began to form.

The SCC's chairman also recalled that the first visit of Senegal's official delegation to Azerbaijan was in 2014.

The Azerbaijani delegation also held a meeting in the Ministry of Economy, Finance and Planning of Senegal, where they discussed the prospects of trade and economic cooperation.