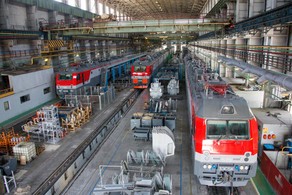 Georgia Locomotive Repair Plant will supply Azerbaijan with electric trains in the near future. Relevant contract is expected to be formalized soon.

Co-chair of Georgian Railway Supervisory Board Nino Tsilosani informed about it.

'Until now, the plant supplied only to trains Azerbaijan. In general, Soviet locomotives are used in Azerbaijan, Armenia and Georgia. However, in the CIS, they are produced only in Russia, Ukraine and Georgia. We plan to start intensive negotiations for locomotive supply to the neighboring countries. We can offer affordable prices', N.Tsilosani added.

The company official said that locomotive production is planned in the base of the Georgian plant.