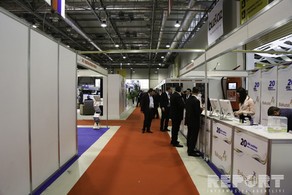 A group of Azerbaijani reporters has visited Antalya, one of Turkey's largest resort cities.

Within the travel, carried out with the support of 'Summer Tours' travel company and Azerbaijan Airlines (AZAL), media representatives have visited a number of tourist facilities, historical monuments and recreation centers in the city.

Ancient Antalya, which is located on the Mediterranean Sea coast in southern Turkey, is a city of resort and port. According to the statistics of 2015, number of the population is 2.3 million people. Locating in the Western Mediterranean region and between Gulf of Antalya and West Taurus Mountains, Antalya is Turkey's fifth largest province by area.

Antalya province surrounded by the Mediterranean Sea in the south and Taurus Mountains parallel to the sea in the north, as well Mersin, Konya and Karaman in the east, Isparta and Burdur in the north and Muğla district in the west. The province's area is 20.815 square km. It is equal to 2.6% of the territory of Turkey. Antalya province locates in the Western Mediterranean region and makes 17.6% of the land area. Approximately 77.8% of the province's territory is mountainous, 10.2% of plains.

During the visit, Azerbaijani reporters met with Antalya Governor Münir Karaloğlu. Commenting on July 15 events in Turkey, the governor said that currently, the situation in the country is stable: 'Observing aside, it is impossible to realize that the situation is good. The unpleasant events, mainly, took place in the center of Ankara and Istanbul.

However, some events also occurred in other cities, the situation was stable in Antalya. Citizens and tourists didn't face with any difficulties. No unpleasant incident happened in the center of Antalya, at the airport or in the recreation centers. Only disappointment was that the international flights to Antalya were cancelled for several days in regard with the incident. It had a bit negative impact on the city's tourism sector. No other case, which could adversely affect tourism and other sectors of the city, occurred, as base of Antalya's tourism sector is strong.

According to him, nearly 50 five star resort villages, 16 golf courses, hundreds of football fields available in Belek, Antalya: 'Many football teams in the world hold training camps here. 35% of Turkey's annual tourism revenue accounts for Antalya. In the country's tourism sector, Antalya is the most visited city (65%) during a year. There are 385 five-star hotels in the city. Last year, considerably more than its population - 12.2 mln foreign tourists travelled the city.

The governor said that such a development of the city tourism has a positive effect on trade, construction and other sectors: 'Since 1980, Antalya has rapidly developed due to favorable climatic conditions and tourism. Trade and agriculture, which makes major part of Antalya's economic activity, is also based on tourism. A great part of the province's territory outside residential areas consists of grain fields, pastures. As a result, the city itself offers food products to the restaurants and hotels. All kinds of products are manufactured in Antalya'.

Majority of the tourists visiting Antalya were the Russians before the aircraft crisis between Russia and Turkey. However, after the mentioned incident, number of Russian tourists fell by 96%. Following Russia, mainly tourists from Germany, Great Britain, the Netherlands, Ukraine, Pakistan and Iran travel the city.

M.Karaloğlu stressed that normalization is observed in the relations between Russia and Turkey over the last month and its has positive impact on the tourism sector of the province: 'Russian tourists have already started to visit the city. In August, regular flights will be resumed in this direction. But, unfortunately, at the moment, number of Azerbaijani tourists is fewer than we expect. Most tourist arrivals from the brotherly country recorded in 2015, being 35 000 people. This year number of the tourists makes 8 000 people. Last year 10 000 Azerbaijani tourists arrived only in July, while 11 700 in August. Currently, 3-4 flights are being carried from Antalya to Azerbaijan every day'.

Today, Antalya has the capability to simultaneously receive 1 million tourists. About 600 000 of this figure accounts for 4 or 5-star hotels. Only in Antalya province of Turkey, number of beds available for tourists is twice more than in whole Spain. Tourism of this city distinguishes from many tourist cities in terms of number and quality.

The governor noted that quality and terms of services provided to tourists in Antalya cannot be find anywhere in the world at these prices: 'Dollar rise hasn't great impact, as the city's hotels mostly cooperate with the European countries. All football fields, golf courses, hotels and other facilities are private in Antalya. None of them is state-owned. Only forest areas in the city belongs to the state. Turkey signs a 49-year contract with entrepreneurs, who construct hotels, restaurants or recreation centers. The contract is renewed every 49 years. The entrepreneurs, investing in Antalya, can easily start a business by paying a small amount of tax on this contract'.

Historic sites, ancient theaters, villages consists major territory of Antalya. The city's tourism is not based only in sea, sand and the sun. 300 of 365 days of the year is sunny here. Antalya is one of the few cities in the world with lots of sunny days. The city of wide plateaus and basins throughout the West Teke part, mainly consists of limestone mountains, caves caused by limestone melting, geysers and valleys.

M.Karaloğlu said that currently, problem of terrorism exists anywhere in the world, but not only in Turkey: 'Main desire of tourists is to comfortably rest in a safe city. Therefore, the government do its best to ensure safety of the city. I can say with confidence that including Antalya, all resort cities of Turkey are safe'.