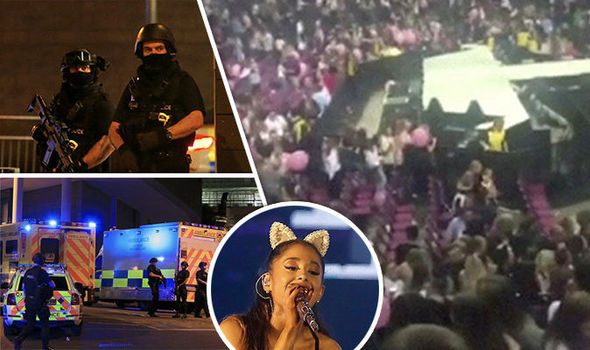 Singer whose concert was bombed says she is ‘so so sorry’ as figures from music to politics voice their shock and sympathy.

Axar.az reports citing Guardian, Ariana Grande, whose concert at the Manchester Arena was targeted in an attack on Monday night, has joined other celebrities and politicians in expressing horror at the events.

Grande, who was not hurt in the blast, tweeted that she was “broken” by news of casualties.

At least 22 people were killed and more than 50 injured after an explosion in or around the foyer area that left thousands of people fleeing.

The rapper Nicki Minaj, a friend of Grande whose vocals are included on her reggae-pop song Side to Side, wrote: “My heart hurts for my sister, Ariana & every family affected by this tragic event in the UK. Innocent lives lost. I’m so sorry to hear this.”

Taylor Swift said she had “thoughts, prayers and tears for all those affected by the Manchester tragedy tonight. I’m sending all my love.”

“I’m heartbroken over what happened in Manchester tonight,” tweeted the English singer and songwriter Harry Styles. “Sending love to everyone involved.”

The first minister of Scotland, Nicola Sturgeon, said the news of the “barbaric attack” was “heartbreaking”.

In New York, Governor Andrew Cuomo said that as a precaution state law enforcement would step up security and patrols.

The Canadian PM, Justin Trudeau, said his citizens were “shocked by the news of the horrific attack in Manchester tonight”. Narendra Modi, the prime minister of India, said he was “pained by the attack”.