Putin’s big problem: USA is no longer the enemy 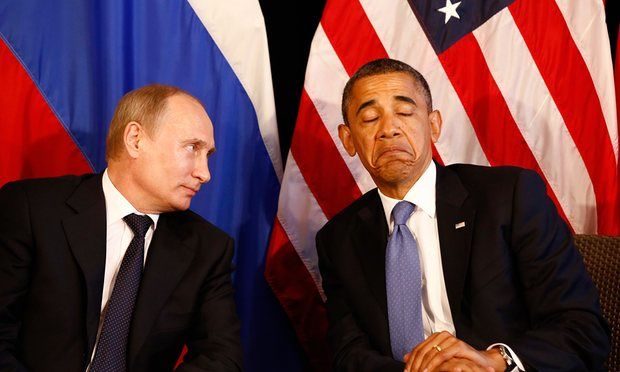 Days before the US election, state TV channel Russia 24 launched a countdown timer of the hours and minutes left until polls opened – a level of hype and anticipation far exceeding that witnessed during Russia’s own recent parliamentary elections.

But for all the professions of mutual admiration between Vladimir Putin and Donald Trump, the mood in the country post-vote should be described as confusion not euphoria. The response from some officials was joyous – members of the state duma gave a round of applause; Viktor Nazarov, the governor of the Omsk region, announced that Putin’s party, United Russia, had triumphed in America; and Margarita Simonyan, editor-in-chief of Russia Today TV, tweeted that she wanted to drive around Moscow with an American flag flying from the window.

But officials higher up the chain treated the news with caution. The prime minister, Dmitry Medvedev, said Russia had more important problems to worry about than Trump’s victory. The foreign minister, Sergei Lavrov, urged people to wait for Trump’s actions and not focus on his rhetoric. And Putin’s spokesman, Dmitry Peskov, said it was too early to say whether the victory would improve Russian-American relations, which have plummeted to a post-cold war low.

It is unlikely that any Russian politician will admit to it, but Russia was much better equipped to deal with a Hillary Clinton victory that would have preserved the continuity of America’s foreign policy and the oppositional rhetoric that Russian politics has thrived on for years.

And despite public expressions of support for Trump, the Russian propaganda machine did not expect him to win. When polls opened in the US on Tuesday, Simonyan tweeted: "Democracy R.I.P." The accusation that the US system cannot be trusted has been popular since 2012, the year Putin became president for the third time.

According to Russian propaganda, the US has plunged Iraq, Libya and Syria into chaos and wants Russia to suffer the same fate. Under this narrative, Putin is the only person capable of holding the US back and saving Russia from catastrophe.

The US is also blamed for orchestrating the Euromaidan revolution in Ukraine, for stage-managing Russian opposition elements from the United States and for encouraging Europe to impose sanctions as a direct response to the Ukraine crisis.

For the past five years, the easy notion of the American enemy has permeated the everyday lives of Russian people. A few years ago car stickers saying "Obama is a wanker" became fashionable and Russian establishments, from cafes to hairdressers’ salons, that carried the sign "we do not serve Obama here" were often promoted on state TV.

A win for Clinton would have preserved these sentiments but Trump’s victory destroys them. Russian parliamentarians were applauding Trump, not realising that he actually undermines their political system, which will have to evaluate how it goes forward now that America is no longer the enemy.

There is another problem. Putin has always enjoyed being a part of the global neoconservative trend that was born from dissatisfaction with the world order that emerged in the beginning of the 21st century. Putin’s Russia loves to lambast the west for excessive interest in the rights of minorities, for refugee policy and other liberal issues. Now that the west is turning on itself in these matters, with victories for Brexit and Trump, the Kremlin doesn’t quite know where to turn.

The Kremlin needed Trump, but as a loser, not a winner. They wanted to be able to continue to oppose the international mainstream, not be a part of it. Now Putin’s main foreign policy objective must be to fall out with Trump, because without that, the Kremlin will have no one to blame for Russia’s problems but Russia.